Special Feelings is an internet art meme depicting a couple being interviewed in a snowstorm with the partner holding the umbrella declaring "Being in the snow with my lover like this immerses me in a special feeling. I like it" while their partner cringes and covers their face with their hands.

It is a parody of a Japanese couple who were interviewed on TV during snowstorm in Tokyo in early January 2013, which gained notoriety on the Japanese web upon its upload via Twitter in early February 2014.[1] Although it is most common among Japanese anime and manga fans, it has also been used for Western fandoms, especially animated ones. 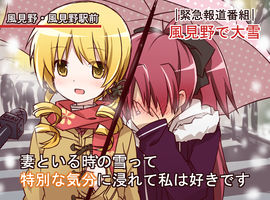