The maryrenaultfics LiveJournal community held its usual summer challenge in 2011 (posted 30 July 2011).[1] This was an untimed challenge to the prompts (a) "spangled loincloth", for people writing Alexander-themed stories, or (b) "summer clothes", for everyone else.

The phrase "spangled loincloth" references the character Bagoas from The Persian Boy (one of Renault's historical novels), who was an exotic dancer in Ancient Persia. As such, it has no obvious relevance to any of her modern novels. However, the moderator, my_cnnr added, "Well – I think I’d pay good money to read a fic in which Ralph Lanyon uses the words “spangled loincloth” in context." Lanyon (from The Charioteer) is a popular character with fans; but, as a gay man in World War II who has a canonical distaste for effeminate behaviour, he is perhaps the least likely of all Renault's characters to be associated with spangled loincloths.

Three members wrote stories, all taking on the additional challenge. The first, a tiny ficlet by toujours_nigel employed the mechanism of a school pantomime, as did fawatson's slightly longer story, which was posted a couple of weeks later. The final story, posted over a month after the challenge was set, also used the pantomime mechanism, but set in a different time frame.

Get the Picture: Clue 14 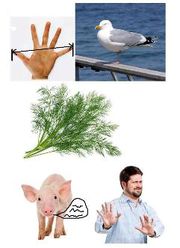 Clue 14: The pictures form a puzzle whose solution is the phrase, "spangled loincloth"

The phrase "spangled loincloth" was later used in the community's on-going Get the Picture game in Clue 14, which was posted by lignota on 8 December 2012. She prefaced the clue with the hint, "Something that seems to be on our mods' minds a lot."[2]