From Fanlore
Jump to: navigation, search
Alexis Rogers moderated the "SlashKink Mailing List" [1] after taking it over from "two guys who were tired of only finding vanilla fiction in their favorite fandom." [2] 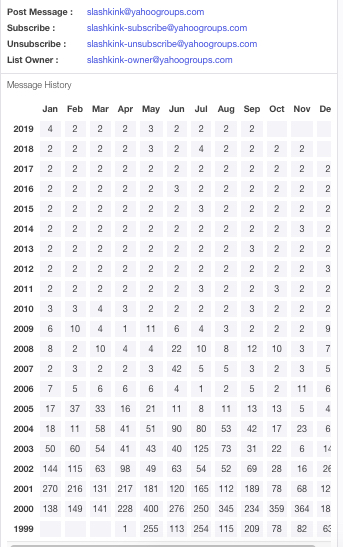 This is a kinky fan slash (adult - mostly m/m) list where slash fic is greatly encouraged. Also discussion of kink, kink in fiction, kink in real life is encouraged. The ListDomme prefers dbsm kink but recognizes and respects other types of kink so join us here in kinkville.

RPS is not allowed.

Description from the Due South Slash Site:

Slash Kink Discussion and Fiction List
An automated list that encompases all fandoms, this is for the kinky crowd, not for the faint of heart. To learn more about it go to Slash Kink on the Web where you'll find specific information on list content, a sampling of the fiction, and a form to join the list.[4]

From the FAQ Page

A couple of years ago two guys who were tired of only finding vanilla fiction in their favorite fandom founded this list. When real life demanded more time from these guys, I was asked to take the list. I (Alexis Rogers) did that because we all felt a place for all fandoms and most kinks is a necessary presence in fandom.

So the age of consent statement only need read that the subscribed is of legal age where he/she lives. I depend on the subscriber's honesty in this matter. Then I need a statement that say the subscriber understands the nature of the list, the kinks, and the homosexual aspects. These will be listed here and in the request for an age of consent and knowledge statement. Please read them carefully to avoid subbing and then quickly unsubbing.

This list is open to all fandoms and most kinks. I say *most* because there are some *kinks* like actor/real person slash that are not allowed on the list. I don't have many rules about what is allowable because I want this to be an open forum for people looking for fiction and discussion.

There is no flaming allowed on this list. It is an active forum that covers a variety of topics including but not limited to gay rights, religion, and politics, in a polite and mature manner. Anything that disrupts that will not be tolerated. I like the attitude of the list the way it is and don't wanted it disrupted. State your opinions while respecting the opinions of others.

Stories with fictional characters under the *magical* age of eighteen appear, and are actively encouraged, on this list. Since this topic is a hot button for many people, please consider this:

A complaint that reflects a certain feeling about the subject of underage fiction is stated:

"I will not go into detail about my own problems here, but I strongly suspect that we *all* feel that underage fiction is an area of potential problem --and rightfully so. All moral and sociological discussion aside: Your ass can be arrested for posting this sort of thing, and don't forget it."

The response to that statement:

NO IT CAN'T!!! I have researched the laws regarding child pornography and you can too by going to this link I have copied the most important part here.

"any visual depiction, including any photograph, film, video, picture, drawing or computer or computer-generated image or picture, which is produced by electronic, mechanical or other means, of sexually explicit conduct, where:

(1) its production involved the use of a minor engaging in sexually explicit conduct, or;

(2) such visual depiction is, or appears to be, of a minor engaging in sexually explicit conduct;

(3) such visual depiction has been created, adapted or modified to appear that an identifiable minor is engaging in sexually explicit conduct; or

(4) it is advertised, distributed, promoted or presented in such a manner as to convey the impression that it is a visual depiction of a minor engaging in sexually explicit conduct."

Notice it says NOTHING about the written word. Writing a story involving an underage fictional character is not illegal. The most you can face is the moral outrage of a narrow minded population.

Bottom line here is that if you object to stories with fictional character under the age of eighteen with others of the same age or with older characters, you should either not join the list or *delete* the stories that bear the warning of underage characters. This item is not up for debate on-list or privately.

Stories will be labeled so that a reader might pick and choose. Don't like a kink, skip it. Other types of kinkiness include hardcore emotional twists such as anonymous sex, characters in warped, unhealthy relationships, and badboys who are genuinely BAD, not just misunderstood.

Frankly I would like to see violence at a minimum since it is acceptable throughout fandom, and society where no one blinks an eye. The purpose of this list is to see sex in all its forms and taboos, where sexual energy is respected and reveled in, where sex is celebrated rather than repressed.

Using either the *0* post, my personal preference, or at the beginning of the story,

Warnings that are required: Death, rape, underage characters. Please list the major kinks in the story such as Daddy/boy or infantilism and others so the readers may pick and chose their kinds.

Have fun, explore the kinks, delete those that don't tickle your fancy. [5]