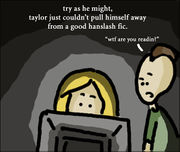 Skeddios was a popular Hanson web comic by Adalen. The comics were posted to her website and to a flocked LiveJournal community. She also created icon versions of many of her popular comics.

One of the most popular features was The Beginners Guide To The Hanson Fandom[1], which was illustrated using LEGO figures to represent Hanson and their fans. A number of other LEGO skits were created as well. The comic featured occasional references to other fandoms such as The X Files, Star Wars and Harry Potter, and poked fun at Taylor's sexuality. Many in jokes were included that made fun of or criticized certain portions of the fandom.