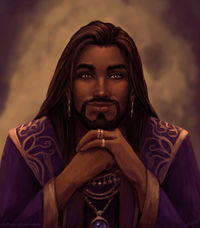 Shaun Gilmore (also referred to by fans by his last name only) is one of the most popular NPCs in Campaign 1 of Critical Role. He's a wizard merchant, owner of Gilmore's Glorious Goods shop in Emon. He was born in Marquet, before moving to Tal'Dorei to open up his shop.

Matt Mercer initially described Gilmore as "paunchy", later on repeating that Gilmore was not a super fit wizard and was, in fact, heavier around the waist. That didn't stop a lot of fans from portraying Gilmore as fit, thin or muscular. That fandom portrayal annoyed, even angered, some fans[1].