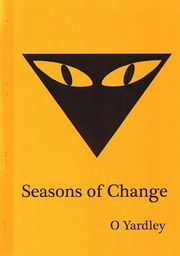 Seasons of Change is a slash Professionals (Bodie/Doyle) A/U fantasy novel by O Yardley. It is 136 pages printed in Times 12 pt with a word count of 87,144.

Excerpt from the Flyer

"They sent you to Eribol, didn't they?"

"And I daresay you came back even more of a rebel than you were before you left."

About to stand on his dignity Doya realised there was very little point in doing so because Card was probably only too ready to tell Bryn the stark truth about her partner. He knew they were together at the moment, could hear the quiet murmur of mind-speech as a background to his thoughts and so he smiled. It was not a reassuring expression.

However Badarick nodded, as if in approval, before commenting, "I'm not surprised they sent you there. A minor lord like Kilgarin wouldn't have had the least notion what to do with you. I often wondered how you were getting along after I had to leave."

"Minor lord?" Doya cast a hunted look about him, fearful someone might have heard this insult.

"What - you didn't think this was one of the major manors, did you?"

Never having given the matter much thought Doya shrugged and added acidly, "In that case what was someone of your exalted family doing serving one of the even more minor minor lords?"

Badarick waved his hand airily, ostensibly concentrating on balancing cheese and pickle on a crust of bread. "Oh, you know. Family politics, finding out stuff."

"Did I what?" Badarick's voice was muffled as he attempted to chew his over-sized mouthful.

"Plenty. Mostly how not to treat people you want to rely on. Fear is no basis for loyalty. Come on," Badarick gestured at Doya's as yet untouched plate, "eat up. We've a long journey ahead of us."

"Oh, yes. That Menelar would find a way to get rid of you if I don't take you out of harm's way."

Bristling slightly at the idea he needed protection from the likes of Menelar, Doya said savagely, "So he stays here to bully and rape as he pleases, does he?"

Badarick paused in his chewing, looked at him thoughtfully and finished his mouthful before saying very softly, "Oh, I don't think so. He needs to be shown the possible consequences of calling in the Enforcer."

Doya's eyes widened as the man changed in a heartbeat from someone friendly and companion-able to a cold-eyed figure of menace. He decided then and there that he would be very careful around this man.