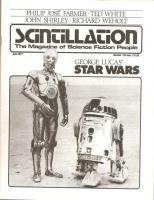 Scintillation is an anthology of mainly articles about science fiction and, on occasion, fiction.

"Scintillation" was published in Portland, Oregon, U.S.A. in the 1970s. It was originally titled "Dork-Pizzle". The first issue under that name appeared August 1975. As of the seventh issue, it was retitled "Scintillation". Thirteen issues were released in all, the last in June 1977.

"Scintillation" was in the top 10 list of SF fanzines for 1977 as noted by Locus.