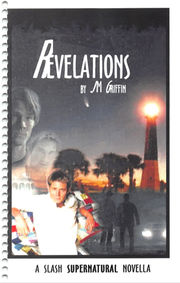 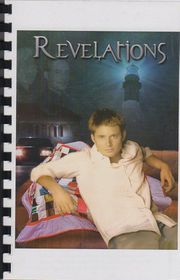 The zine was previously sold by Agent With Style but later distributed through GriffinSong Press. [1]

Having his brother Sam back in his life means there are certain things Dean Winchester tries his best to avoid doing. But after an intense encounter in a bar in Savannah, GA, Dean finds his world is changed forever by the tall good-looking blond man who calls him Win. [2]

Having Sam back in his life changes everything for Dean, but it isn't long before he finds himself falling back into some of his old ways. Full of brotherly byplay, this novella explores the connection between Dean and Sam, as well as the deepest desires of Dean Winchester. Dean meets and falls for a man named James, but Sam is suspicious. What does James want -- really? Is his brother safe with this mysterious man? This novella is Dean/Original Character; there is no Wincest. But can brotherly love save Sam when he steps between Dean and the man of his dreams? [3]

I have a lot of people to thank for this little foray into Supernatural fic.

First, I blame Wolfpup, who I don't even know. Someone brought a couple of her exquisite and eye-opening song vids of Sam and Dean to REVELcon 2006, and in a heartbeat I was hooked.

Then there was Sue, who kept talking about the yummy brothers, brought her copies of the show to the afore mentioned con, and then became my advisor extra ordinaire as I ventured back into writing gen fic.

But wait, you cry, this zine isn't supposed to be gen. And I promise, it's not. I suppose you could call it an AU because it is Dean/OMC. And that is all the fault of Lady Angel, who was there when I saw my first ep. Dead in the Water. I took one look at the fine Texas scenery (thanks so much for that little phrase. Sue) and my eyes began to gleam. I knew from the start I didn't want to write the brothers as lovers, but I saw all kinds of other possibilities. (And this, after only having seen one episode!) Lady Angel, knowing my penchant for original characters, and having some interest in them herself, sort of lit up when I said I had an idea about Dean. It took a little time, and borrowing Sue's tapes, for me to get where I needed to he to start writing, and then Dean, Sam, and James began to speak in my ear. I should add it was due to these three that I had an absolute blast writing this saga.

So, if you enjoy reading this zine as much as I enjoyed writing it, please he so kind as to send an LOC and tell me!