Raiders of the Lost Ark: The Adaptation

Raiders of the Lost Ark: The Adaptation is a fan-made remake of the movie made by two boys (Eric Zala and Chris Strompolos, later Jayson Lamb), who at the beginning of the project were ten and eleven years old. While sitting in Eric's basement, the two boys planned to remake the entire movie shot-for-shot, an undertaking that occupied them for the rest of the 1980s. They spent hours memorizing dialogue, recruiting extras, scouting out locales, plotting scenes, and collecting the props they needed: a bullwhip, a leather jacket, six cans of spray paint, a VCR, and of course, a boulder. 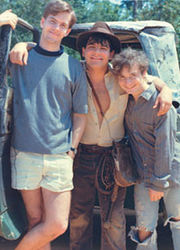 Eric, Chris and Jayson, photo taken by Chris Strompolos in 1988

Chris undertook a secret mission to the Hardy Court Cinemas in Gulfport [Mississippi] with a tape recorder strapped to his chest—only to be tossed out by an usher who was apparently sensitive to matters of copyright. The less mischievous-looking Eric tried the same thing later on and got away with it... In those days, before prompt home-video releases, the audiocassette made by Eric was crucial. The two boys committed its every line to memory, like religious scholars of old learning a sacred text, and they also trained themselves to match the actors’ inflections. Using as source material the tape, the comic book, their memory of the film itself, and a novelization, Chris scribbled down descriptions of roughly 20 shots from the movie; Eric continued this tedious process in his precise handwriting until they had a list of 649 shots in all. Now their plan had the elegance of simplicity: film each of the 649 shots as written, and the movie would be done. How hard could it be? Eric made detailed sketches of costumes, which, along with the shot list, went into a spiral-bound notebook labeled “Raiders of the Lost Ark Book of Ideas and Memos. Indy and Toht’s Notes: Don’t Touch!! [1]

Some Excerpts from the Article in Vanity Fair

The first day of actual filming took place in the Zalas’ lush backyard, which was serving as the Peruvian jungle where Raiders of the Lost Ark begins. Jayson, aged 13, was operating a clunky, two-piece Sony Betamax video camera rented for the boys by Chris’s mother. Eric, who had given up the Toht role, was now playing the meatier part of Dr. Rene Belloq, the French archaeologist and Indiana Jones’s prime nemesis. “Dr. Jones,” said Eric, now almost 13, matching Belloq’s accent, “again we see there is nothing you can possess which I cannot take away.” As Indiana, Chris, 12, handed over the relic coveted by Belloq. He was surrounded by a bunch of spear-carrying, half-naked kids, most of them blond, who had been recruited by Eric to play hostile Hovitos Indians. As Eric inspected the idol, Chris made a run for it. The natives chased him. Cut. For the next scene the cast and crew headed to the Tchoutacabouffa River, about 10 miles away. Parents drove them.

Eric began transforming his basement into a Nepalese bar. His father may have drunk too much, but all those empty green wine jugs made nice props for this sequence, which required two scary elements: (1) fire, which engulfs the bar after a gunfight, and (2) a girl to play Marion Ravenwood, Indy’s love interest. A classmate named Stephanie Ewing got the part, because she had the right hair color and said yes. Jayson checked a magic book to find the ratio of isopropyl alcohol to water necessary for creating flames that would burn out quickly... The flames rose and died quickly, as planned. Then came Eric’s big moment as the Ratty Nepalese. For a reason no one recalls, he asked that the back of his robe be doused not with isopropyl but with gasoline. The gas was lit. Eric screamed. Jayson got the shot. Two kids were supposed to put Eric out by smothering him in a blanket, but in a panic they fanned him. The flames rose. The smell of singed hair filled the room. Chris grabbed a fire extinguisher they had on hand and blasted his friend with the powdery spray. “No!” screamed Eric—not because he was on fire but because he wanted the extinguisher emptied only in an emergency, and this, in his opinion, didn’t qualify. It costs real money to refill a fire extinguisher. One month into filming, Eric was already thinking of the budget.

So now they had two tricky scenes nailed, but were still left with the boulder problem. Eric sent away for a $39 weather balloon he had spotted in a comic-book ad. Finally, it came. He inflated it. It was big. All night long in the living room he slapped on papier-mâché. After a few hours of sleep he returned to find a sad, deflated lump. Next idea: chicken wire. He worked for hours on the front porch, shaping it into a large round frame, before finally going to bed. As he slept, Hurricane Elena came to town. Eric made it to the window in time to watch, helpless, as the wind took his sphere across the front lawn and far into the Gulf.

Like all the main bad guys in the original movie, Belloq dies horribly in the last sequence when the ark is opened and demons rush out. On July 17, 1987, Eric, Chris, and Jayson started getting ready for this big finale. The first thing they had to do was make a plaster cast of Eric’s head, so that they could film it exploding later on. They read from Eric’s worn copy of Derek Taylor’s 1981 book, The Making of Raiders of the Lost Ark, to see how it was done. Then Eric sat on the back porch of his house with two straws up his nose. Jayson wet his face with soapy water and slathered on three inches of industrial plaster, making sure to cover his eyes and mouth. Almost immediately Eric started squirming. Chris fetched a pen and paper. “Hot,” Eric wrote. The air going in and out of the straws suggested panic. The plaster was already hard. Chris poked at it with a screwdriver to no avail. He got a hammer and banged. Nothing. Even a hacksaw couldn’t break through. Their big mistake, they later realized, was using industrial plaster, which heats considerably on contact with moisture. Eric again gestured for the pen. “Hospital,” he wrote. Chris called 911... At the hospital, as the doctor removed the plaster before a small audience of amazed residents, Eric learned just how far eyelids can be stretched. For weeks afterward he went around with no eyelashes and one and a half eyebrows.

The film was finished in 1989 and shown to a small audience. It was shown again in December 2002 by Eli Roth at the fourth edition of Harry Knowles' annual Butt-Numb-a-Thon in Texas and stole the show.[2] One interesting note, despite the creators' attention to detail, Spielberg's name is spelled "Spielburg" in the credits.

The three each received a letter from the director of Raiders of the Lost Ark himself, saying he had appreciated their “loving and detailed tribute.” Back in Austin, the Drafthouse movie theater booked Raiders of the Lost Ark: The Adaptation for a three-night engagement to begin May 30, 2003, with a special appearance by the filmmakers, who hadn’t seen one another in years.

In November 2012, a book about the film written by Alan Eisenstock in cooperation with Eric Zala and Chris Strompolos was published by Thomas Dunne Books.[3]