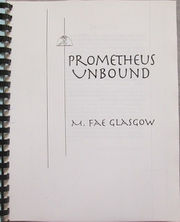 Prometheus Unbound is a slash Professionals novella by M. Fae Glasgow that was released as a circuit zine at Friscon 1993 to members of the Virgule-L mailing list. The story was also slated for inclusion in Orbital Resonance I, a zine that was never published.

The story offered a satirical look at the Virgule-L mailing list's decision to not allow men to join the slash mailing list. Some members found it hypocritical to refuse admittance to men while simultaneously ogling at male TV characters. Other list members pointed out that given the hostile online climate towards women at the time, a female only space was the only safe place for said ogling. In the story, Bodie and Doyle investigating a murder at an all female college during which various mailing lists members appear under pseudonyms arguing against the presence of men in their hallowed halls. In 2011, MFae's story was put back into circulation as part of the Proslib circuit library.

Deeply amused by the story, Morgan Dawn composed and mailed MFae a fake C&D letter in 1993. The letter was written at a time when many slash fans knew each other by their real names and had each other's home addresses. Although Morgan Dawn had supported the mailing list's decision,[1] she, along with other members, could never resist a well written parody and felt compelled to respond in kind. Her 'homage' letter is reposted below with permission.[2]

Re: Cease and Desist

It has recently come to my attention that you have seen fit to attempt to satirize recent events taking place on the "Slashfen Mailing List", along with depicting members of that list. On page 62 of your work entitled "Prometheus Unbound", I came across a reference to "Ms. Priamsdottir" which clearly is a reference to my person... I have not authorized you to use my person in your work of fiction nor have I have implicitly or explicitly consented to be a character in your work. Although the fair use doctrine permits writers to satirize or parody events, it does not give them license to libel known and recognizable individuals. In particular, the fair use doctrine does not allow you to imply that "I'd much rather look at those two gorgeous rumps than old Betty any day of the week." I have never expressed such sentiments (although it is true that I am looking forward to the male strippers at the upcoming Escapade convention) nor have I ever been known to frequent all female colleges in Britain where most of the women spend their time engaged in what can only be accurately described as "hothouse activities." As a professional with a reputation to maintain and a lifetime income of considerable worth to protect, I must demand that you cease and desist publishing these scurrilous untruths as they can only be detrimental to my character. I look forward to a speedy resolution to this mater or I shall be forced to predict a dire event in your near future.

Prometheus Unbound is a delightfully painful, excruciatingly wonderful story and I missed class the day it arrived because I couldn't tear myself away. [3]