Professional Hilarity is a gen crossover 42-page novel by Bonehead. 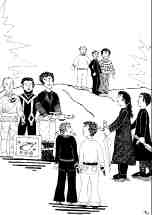 cover or inside art

Summary from the author: "It starts as "A Story in Search of a Plot" but turns out to be a multiple crossover with British and other tv-series and sf-classics.When CI5 is faced with budget shortenings, Bodie and Doyle are forced not only to share an Austin Mini as their car but also to share one small appartment. For Bodie their new accomodation at least offers comfort in the person of the beautiful blonde Romana, the assistant of the Doctor who begins to change the Austin into something else. The beginning romance is interrupted by a visit to Craggy Island, a hostage exchange in the notorious BBC quarry and a gourmet weekend at Fawlty Towers where the two encounter a stranded Star Fleet Captain. As time goes by Bodie and Doyle are soon involved in a case which sounds like the idea of some amateur Science Fiction writer who hasn't anything better to do - but if you consider all the facts, it might just be worth it. Page by page the following series/characters are getting involved: Blake's 7, Doctor Who, Dracula, Father Ted, Fawlty Towers, Highlander (tv), Star Trek, The Professionals, Starsky & Hutch, Winnetou & Old Shatterhand, and a lot more. It might help if you knew the characters but you don't have to." [1]