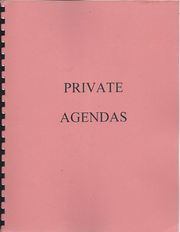 Private Agendas is a slash 200-page Starsky and Hutch novel by Charlotte Frost.

From Media Monitor: "S&H explore new elements of their relationship against the backdrop of a series of murders in a local park. Subplots feature Luke and Doris Huntley, stewardess Kathy Marshall, and a favorite race horse."

"SPECIAL THANKS TO: Sylvia Bond (for help with the title), Beth C. (for taking out all those excess commas), Trish J. (for numerous suggestions), Mary M. (for catching all those typos that the other three missed)"

[comments from 2012]: This was my second zine in SH fandom and my first novel. I sent a copy of the zine to an editor and friend I respected from my prior fandom. She called me and said, “I’m sorry to tell you this, but this novel doesn’t have a plot.”

Oh. After all that work, I felt like a failure.

For years after its publication, I’d apologetically tell people, “Well, in the novel, this happens and that happens. But it doesn’t have a plot.”

Looking at my snail mail LoCs (feedback) now, I can see how much readers compliment me on the plot, but I wanted the approval of that particular editor. It was years before I was able to dismiss her comment as retaliation for my having published my own stuff.

As for the story itself, it was quite a challenge to do all on my own. I cringe now at the POV inconsistencies. I had a beta that tried to correct a lot of it, but I didn’t understand what she was doing, so dismissed a lot of her corrections and was later sorry for it.

Still, I’m quite proud of the first-time sex scene. I love the slow, drawn-out sequence of events. For years afterwards, I wished I could “do that again”.

Once, I had contact with a local S&H fan who knew nothing of fandom. She was rather offended when I first brought up slash, but then called me to talk more about it after she’d gotten over her shock. I tried to describe how loving slash stories were – not just about sex – and somehow I mentioned the “30-page sex scene” in this novel. We ended our conversation with me agreeing to loan her copies of my zines, and she could pay me if she was interested. Her final words were, “Make sure you include the one with the 30 pages.” *g*

As for the horse racing scenario, that was a natural for me, as I was an intense Thoroughbred racing fan. In fact, it was a challenge to not cram too many details into the first chapter and bore the reader with irrelevant background details.

I haven’t read this in a long, long time, and I’m just now remembering that Starsky gets stabbed and left for dead. I don’t think I even remember what happens after that, or what the comfort is like. Maybe I’ll re-read it this weekend. [1]

[comments from 2013]: I remember for my first SH novel, PRIVATE AGENDAS, I had four betas that I mailed out a copy of the manuscript to. (No mainstream email back then.) One of the copies I got back had, perhaps, five typos marked. In the entire 180 or so pages, she had marked absolutely nothing else. I felt she hadn't done her job. But then, it turned out, most of the typos she marked were ones that the other three betas missed. So, her contribution was valuable, after all. [2]

[comments from 2014]: Looking back now, I recall that I'd sent a copy of the fanzine to an editor friend, who had published the vast majority of the my K/S stories, and my very first SH stories. She called me and said, "I hate to tell you this, but this novel doesn't have a plot." She probably went into a few details, but I don't remember any of them. I had a lot of respect for her opinion so, for quite a long time after that, I thought of PRIVATE AGENDAS as being a plotless novel, and I sometimes even warned potential readers of such. It took me about a decade to realize what a ridiculous statement it had been. There's no doubt that this editor felt a need to be negative, because she was miffed that I had started publishing my own stuff.

I do know that the narrative have some problems with some jarring phrasing and point of view shifts, especially during the first sex scene. I remember one beta that was trying to correct a lot of that, and for some reason, I didn't understand why she was making the corrections she did, so I ignored them. Big mistake! Nevertheless, I am quite proud of that first time scene, which goes on for some thirty pages, from the time they start talking in the car, outside of Hutch's apartment building. That was the kind of slow buildup that I loved most in my slash reading. It was even more fun to write it.

After my first two fanzines had been printed -- HEART AND SOUL and PRIVATE AGENDAS -- some fans in the Denver area, where I lived, decided to hold a slash-friendly fan convention. So, I bought a table at the con to sell copies of my two fanzines. One of my most vivid memories was of a woman swooning up to my table, grabbing multiple copies of PRIVATE AGENDAS, and telling me how she and her friends had been sharing a single copy, so now she was buying copies for everyone. They had been discussing it enthusiastically on a discussion list on America Online. She looked right at me and said, "But, of course, you know that." No, I didn't know anything about it. This was back when email was new for mainstream America, and you couldn't be a member of a list hosted by a different email provider than your own. I was using the other popular service called Prodigy, so I didn't have access to anything going on, on America Online. But I don't think I ever got around to telling her that, because I was so stunned by her presumption that "Of course, you know that", which she repeated a few times. It was a big lesson in how people assume things, when they don't know you at all -- though that didn't detract from how glad I was that some readers were enjoying it so much that they wanted to discuss it with each other. [3]