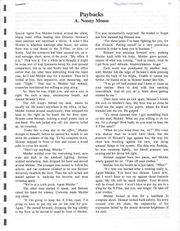 first page of this story in an unknown zine

Payback by A. Nonny Mouse is an early explicit Mulder/Skinner fic.

Printed in an Unknown Zine

At some point (likely the early to mid 2000s) this story was printed in an unknown zine, along with Authority, and other fic. It is unknown if this was with or without permission.

A fan in 1997 refers to the title as "Paybacks," as does the zine version. The online version by the original author calls it "Payback."