Passion is a slash and het Buffy the Vampire Slayer anthology.

Passion 1 has art by Worst Witch, Elaine McMillian and Sandy Hall. It was published in November 1998 and contains 215 pages. 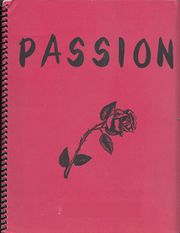 cover of issue #1
From the editorial:

What possessed me to do an adult Bufly the Vampire Slayer fanzine? I don't know. Maybe Ethan Rayne put a spell on me. The more I thought about it, the more I liked the idea. The difficulty was getting people to write stories that would not be posted on web sites. There is something to be said for instant gratification on seeing your work in print and getting instant feedback from readers via E-mail. So I begged and pleaded and whined and pestered until the stories started to roll in. The result you hold in your hands. Thanks guys, I couldn't have done it without you!

I thought of including oven mitts with the zine, some of the stories were so hot! <G> Most of the stories have Giles, the sexy fuddy duddy of a librarian as a main character. Giles basically does it with everyone. Well, not everyone... I just couldn't stomach the idea of Giles and Snyder getting it on. Eeewwww. [ admit that I'm a Giles fan, but so it seemed were the majority of the writers. I was able to beg a handful of Buffy/Angel stories and Willow gets some action with three different guys! Beware Fire and Ice, it is extremely combustible and not for the fainthearted! And Spike and Dru. everyone's favorite vampire couple gel a chance for a snuggle in Princess. Speaking of combustible, check out WorstWitch's artwork. She not only came through with scrumptious illustrations, but contributed two stories as well. Bitter Enchantment is a sequel to a story called Knowledge found at the Naked Place, a wonderful website where you can find Adult BtVS fan fiction involving Giles. All of the stories except three are male/female pairings. Those three involve Ethan and Giles. There are three ABH (anywhere but here) stories where the reader is the main character with Giles. Two of these were written in collaboration during online chats on IRC with a group of GASPers - (Giles Appreciation Society Panters) The other Love Bites was written by an extremely talented ABHer GylzGirl. Most ever)' Monday morning she comes through with an ABH on the Gasper mailing list.

A few of the writers have included their E-mail address, so please send them feedback! Some of them live for it. <G> All other letter of comments can be sent to [address redacted] and will be forwarded lo appropriate authors and artists. 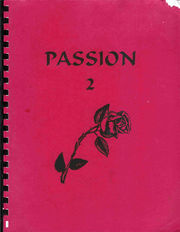 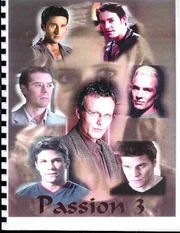 Passion 3 was published in 2000 and contains 202 pages. It has a cover by Jennet Jourdemayne and interior art by Elyse and Sandy Hall.