You may be looking for Endambar Parma, a Lord of the Rings and Lost archive.

Parma Eruseen was a medium-sized, selective archive for Lord of the Rings fanfiction, fan poetry, fan art and essays, founded on March 2, 2003 by DeeDee.

The archivists were DeeDee and Licia, with a team of moderators who helped to select content including Anaria, Arwen Rose, Elessar's Girl, Lhunuial, Maggie and Rose Gamgee. It ran two rounds of the Parma Awards. The site included a discussion forum. It was the sister site of the Emyn Arnen Fanfiction Archive and a member of the Middle Earth Webring.

Parma Eruseen is not elitist, but we like good stories with proper spelling and grammar, plot development, and realistic characters and dialogue.[1]

Parma Eruseen was founded in March 2, 2003 by DeeDee as a fanfiction archive, and extended to artworks in December 2003. The archive was last online in around 2006. 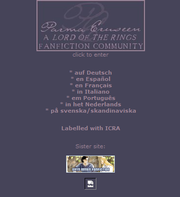 As of March 2005, Parma Eruseen housed the work of 202 authors and 28 artists, with 488 stories, 189 poems, 62 essays and 81 works of art.[2][3] Unusually, the archive included works in six languages: English, French, Spanish, German, Dutch and Swedish. The archive was perhaps best known for its collections of essays and poetry.

The fanfiction was mainly gen, but non-explicit het and slash were also archived, with a maximum rating of mild R. RPS was not archived. Non-canonical pairings were accepted, but the archivists stated that some pairings: are a little too out there. Just keep it within the realm of canon. Sauron/Rosie shippers, this means you.[1] In general, the archivists preferred works that stayed close to canon:

We're not strict about sticking to canon, but please don't venture too far from it either. We won't double-check your geography in our Atlas of Middle-earth, and we'll respect that interpretations vary. If you need a small stream where there isn't one, then make a stream. But don't move the Anduin to the Shire. You get the idea. ;-)[1]

In 2005, the archivists compiled a keepsake print copy of some of the archive's content into a 234 page paperback titled "The Parma Eruseen Essay Collection". [4]