You may be looking for Panopticon West, a US Doctor Who convention.

Panopticon was a Doctor Who convention that was organised by the committee from the Dr Who Appreciation Society (DWAS) and was held at the Imperial College, London. 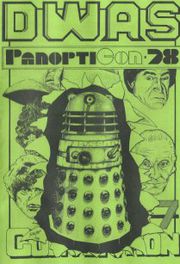 Billed as the World's premier Doctor Who convention, this year's Panopticon had a lot to live up to, and it succeeded admirably. The was an impressive guest list and the World Premiere showing of Downtime. The only disappointments were the price, the lack of a proper programme schedule, and the dealer's room. The two day convention fee was a hefty 39 pounds sterling (about $80 Canadian). I know they had a lot of guests, but they didn't have nearly the travelling expenses to bring guests to the con that North American conventions have. The extensive guest list included:

A Con Report the Fifth Con

"after lunch while chatting with other attendees later on, I heard strong rumours that Jon Pertwee was going to come, I looked forward to the rest of the day with even more enthusiasm..." noted the reviewer.

Other interviews were conducted with Nicholas Courtney and John Levene followed by the showing of the video ' Jon Pertwee Extraordinare' ; "my earlier hopes were confirmed. Pertwee made his way up the isle admist the most authusiastic applause of the weekend. he strolled up to the interview desk and exclaimed in a booming voice 'I AM THE DOCTOR!'" Thomas ends his review with the idea that the event should be held every other year in London thus giving others outside of the City a chance to attend at various locations around the country.

An interview with Anthony Ainley: He ( Anthony Ainley ) worked with Geoffrey Beavers on THE KEEPER OF TRAKEN: Has he ever met or worked with the Master's other tv incarnations - Roger Delgado or Peter Pratt? "No, but I once sat next to Roger Delgado in a pub. We didn't know each other - I remember he was explaining VAT to a friend!" [2]