Panic Moon is a gen Doctor Who anthology published in the UK. It contains art and articles covering Doctor Who from the 1960s through to the 2010 series and beyond. In March 2012, the zine went on hiatus.[1] In November 2013, the publisher announced their plans to resume publishing with a December 2013 issue.[2]

The editors say it is "small (A6 format and 32 pages) but perfectly formed. Just right for reading on the bus."

Summaries for the tables of contents listed below are from the publisher.

"Just about a month ago, I wrote wonderingly about how some fans seem to be going retro with fanzines printed on paper… just like in the 1980s! Apparently, the meme is spreading — the second issue of Panic Moon has just been published....[quoted publisher summary snipped]."[3]

"Oliver Wake produced seven issues of the excellent Panic Moon, a sexy little A6 Doctor Who zine, before calling it a day. Most of the issues are still available from him."[4]

"There’s a mini-revival of Doctor Who fanzines at the moment (something dtb welcomes) with many Who fans still enjoying the experience of reading something on paper rather than just looking at all the assorted Doctor Who websites that are around these days.

An honourable mention, then, for Panic Moon, a terrific little ‘zine which is worthy of widespread support. We say ‘little’ because the publication is A6 in format. Yes, A6, but believe us, it works. Each issue is absolutely packed with well-written commentary and illustrative material that wouldn’t look out of place in DWM.

The latest issue has a lovely mix of stuff with a look at the Richard E Grant version of the Doctor, the Silver Nemesis ‘Making of’ documentary, a tribute to Nicholas Courtney and (as they say) much much more!

"This is one of my favorite fanzines. Panic Moon is published/edited by Oliver Wake and is unique in that it doesn’t conform to the typical size fanzines usually publish in (A4, A5 and Letter size). Published in the 4×6 inch or A6 format, other than the size, there is nothing small about this zine. Each subsequent issue seems to better than the one published before it. Oliver and his team of contributors present a zine that is well designed, well written and highly entertaining and interesting. Articles range from the lighthearted to the serious and every other page is illustrated by some.[6]

"A Shouting Into A Well minion writes: The editor has asked me to say what a great read Panic Moon is, he can't comment directly on the grounds of having two articles in there (obviously those are best). First reaction on seeing the A6 format was surprise at how tiny the pages seemed (A6 paper size is A5 folded in half -TECHNICAL ED) but inside is lots of text and some brilliant illustrations. This issue concentrates on reviewing series five of Doctor Who with relevant articles in between to widen out the scope of the fanzine. Well worth the cover price and very highly recommended."[7] 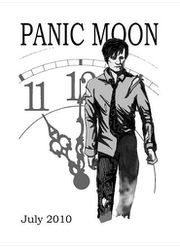 Panic Moon 1 was published July 2010 and contains 28 pages. The front cover is by Dave Burson.

A review by Paul Scoones:

Most of the issue is filled with individual reviews of each of the Matt Smith stories. All too often fan critics seem to feel the need to accentuate the negative, so it is are refreshing to see that the reviews, from a number of different writers, are fairly balanced in their critiques. Interspersed with these reviews are short features on controversial topics including Amy Pond's character, the redesigned Daleks, and Chris Chibnall's writing. Although almost all of the issue is taken up with coverage of the Matt Smith series, there is room at the end for commentary on a few other recent fanzines and the latest crop of Big Finish releases. The introduction explains that this emphasis on the new series is simply because it is topical and that the next issue will have 'more old series stuff'. The artwork, all in black and white, is of a high standard and is used sparingly throughout the issue, nicely complementing the writing. The layout is pleasingly straightforward and unfussy. [8] 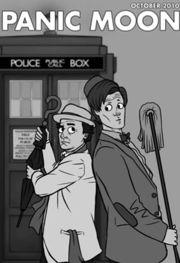 another version of the cover of issue #2, Lydia Butz 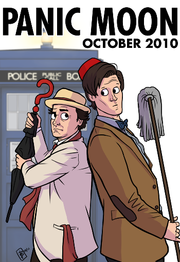 Panic Moon 2 was published in October 2010 and contains 36 pages. It has a front cover by Lydia Butz. 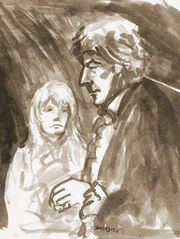 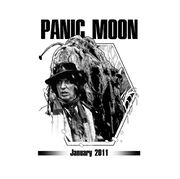 Panic Moon 3 was published in January 2011 and contains 32 pages. 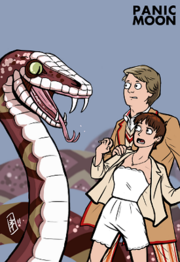 another version of the cover of issue #4 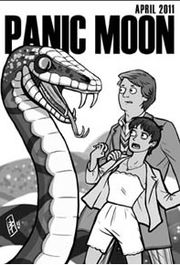 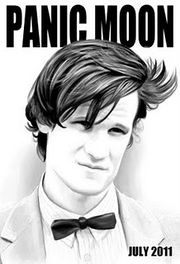 Panic Moon 6 was published in October 2011 and contains 32 pages.

It includes reviews of each episode from the second half of series six plus Torchwood: Miracle Day, the latest from Big Finish and recent Doctor Who fanzines. New perspectives on the stories Colony in Space and The Sun Makers. Articles exploring the Pathfinders legacy for Doctor Who; the Hartnell factor; evolution in Doctor Who; the Day of the Daleks ‘Special Edition’; and what that Dalek was doing in the Thames. Plus a lively letters page and some beautiful artwork.

Panic Moon 7 was published in January 2012 and contains 32 pages. 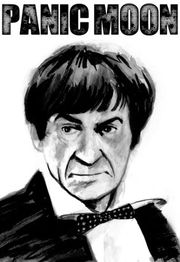