Outside By the Blue, Blue Moon 'verse

Outside By the Blue, Blue Moon is a series of Supernatural slash stories written by ninhursag.

The story was written for the Family Secret challenge. The prompts were #81 (Sam loses his virginity and keeps it a secret from everyone) and #94 (magic items).

Author's Summary: "Sam makes a sacrifice to save his family."

The story was included on the sawedoff recs LJ community's final recommendation post. In 2012, the story was translated into Russian by yelynx and can be read here.[1] In July 2012, Russian vidder semar created a fanvid for the series using external source footage to illustrate the storyline. The video can be viewed here.[2]

Stories in the Series 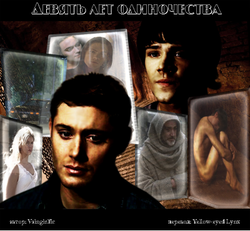 cover art for the Russian translation by yelynx

Translating A Complex Storyline Into A Vid

In 2012, Russian vidder semar crafted a fanvid about the series using external source. Since the storyline begins with Sam at age 15 and Dean at 19, the vidder used footage from the actors' earlier careers. Carefully cropped adult movie footage was used for Sam's coerced sex scenes. And to illustrate the magical gag that prevented Sam from telling his family about the cure, a sigal was repeatedly placed over Sam's mouth. And finally, Wincest photomanips were used to outline the shift in Sam and Dean's relationship. One viewer was so inspired that she asked permission to write fanfic based on the vid.[3]

[For the series]:"I would easily put this into my top ten all time favorites in fandom along with the sequel Season of the Witch Beautifully written with exceptional characterizations that feel very much like Sam and Dean in canon. This is a journey from youth to adulthood that brings Sam to life. If you haven't read these - hurry up - go!"[4]

[For the series]:"A very plotty, well thought out long story. Could almost be AU in that the type of person Sam seems to be isn't quite what canon is, but the basic show plot of the pilot is followed. Not out of character or anything, just with a past that probably doesn't groove with what we know. I really enjoyed this fic. The relationship to develop between Sam and Dean is still my favorite part, but the turmoil and angst and pain of Sam's life is intense and sharp and perfect. Dean's utter frustration and lack of understanding is heartbreaking. The 'MOTW', so to speak, is well developed. I don't usually care much for the 'monster' part of fics, but this was done so nicely I enjoyed that too. Read the warnings before you plunge in, though. Because the point of the plot is that Sam is cursed and that leads to massive amounts of sex with strangers, dubious non-con and other 'kinks'."[5]

[Out By The Blue, Blue Moon]: "A long story with well crafted characters (I especially enjoyed Jess in this) and a premise that leaves the reader just as frustrated and hurting as the characters themselves."[6]

[Out By The Blue, Blue Moon]: "Lo, I have found one of the stories I was looking for. A terrific read, and an amazing job making a fairy tale come to life. Only I’m not sure which fairy tale, it just reads like its based on one. Sam is captured by this demon who insists that Sam stay with him. If Sam does not do so willingly for a month, the demon will kill Dean and Dad. Sam watches his brother and father through the window and agrees. A spell has been cast. Sam must stay for a month, he can never tell anyone, and the horrible horrible spell that has been cast over him can only be broken by someone who loves him. So. Brilliant. My favorite part is where Dean (natch) is the one who figures it out, not just the spell but how to break it. He relaxes against Sam and says, “I can fix that.” You know. Just like the guy in the movie Holes who grows those terrific onions. “I can fix that.” Well, mabye that’s not exactly what he says, it’s something more along the lines of, “Heck, that’s easy.” There’s a lot of love there between brothers, and I just want to go soak in a whole tubfull of it."[7]

[Out By The Blue, Blue Moon]:"This is probably on my top five stories of all time list. Sammy's sacrifice is heart-breaking, and the author is an incredible writer. I was heartbroken when she stopped writing in SPN fandom. I still go back and reread the whole story from time to time....It has a fair amount of Sam/Jess, but Jess is the most amazing Dom on the planet. I will never love anybody's Jess the way I do this one."[8]

[Out By The Blue, Blue Moon]:"Gripping, this story reaches into your heart and takes every emotion you have for a ride. Beautifully balanced between angst and hope, this Sam-centric fic presents a Sam that is willing to sacrifice himself, but never gives in, showing courage and strength in the face of pain that he has little hope of ever alleviating. Dean is protective and also shows a willingness to do anything for Sam. The characterizations ring very true to me and I feel so deeply for both boys, and find myself desperate for them to find a little happiness. Not only do I find this story compelling with its elements of horror and violence and utter creepiness, but it is a fic that stays with me, brings me back often, and always leaves me with that breathlessness that comes from a story that has left its mark."[9]

[Out By The Blue, Blue Moon]:"I really liked this fic, even though it's a little bit more fucked up than my usual tastes. It's extremely messed up, and kinky, and I felt for poor Sam--it's also really well written and characterized. What I like best is how you managed to write the non-con and torture-sex bits: they rode the line of being almost sexy, but you preserved the full horror of them. All the time, I could feel Sam's tiredness and degredation (sic) and unhappiness in his compulsive needs. The way you set up the curse was clever too: instead of making Sam hot and panting for the coercive sex, he was always himself, hating it, yet needing it. I really liked that with Jess, with someone who loved him and that he loved, he could find a measure of peace. But my favorite thing has to be how you didn't make Sam a weepy, whiny victim -- he made this sacrifice as a fifteen year old, and despite all the pain and ugliness, I think he'd make the same choice again, and instead of letting the abuse and perversion breaking him, he grew up to be kinda strong. Very kinky, yeah, and as a grown-up, able to manage it better than he did as a kid, but not broken. I really, really like that; one of the reasons I don't really read much dark!fic this dark is because the characterization of the the abused!sub gets so... powerless and almost infantilized. I love that you have Sam strong as an adult, getting his own revenge back at the demon. Great story."[10]

[Season of the Witch]:"Sequel to Outside by the Blue, Blue Moon and OH man. Dean’s got to put the peices (sic) back together after rescuing SammySamSam from this horrible spell that was put on him. Sam saves himself, see, but he’s in peices (sic). He needs Dean. Dean puts Sam back together, and all’s well that ends well. Only it’s not perfect, right, but it’s good. Winchester good. Where everyone’s alive and that’s all that matters. More like this, please."[11]

[Season of the Witch]:"Technically, this fic is about Sam and his curse as continued from Outside By the Blue, Blue Moon, but it's also mostly a story about Dean and his love for Sam and how he fulfills his responsibilities to that love. There is angst, but overall this a love story that is about overcoming adversity and making choices."[12]

[Shame is the Shadow of Love]:"This was recced to me in an urgent email. And I'm really glad. For such thick, plotty AUs are not always easy to find. I find myself quite taken with your vision of Sam here, he's--hmmmm, how do I say this--he's a bottom with such *dignity* in a way. Which is not to say that bottoms aren't generally, just that it's notable here. And interesting how he's not really a lifestyle bottom exactly. And I find it interesting how you show the friction there can be between people who are really "joiners" needing (at some point) to be in a scene, if that makes any sense. I like your Jess a lot too - she's so thoughtful and perceptive in a way, which seems odd to say considering she missed so much (about Connie initially) but she's really capable of being reflective. It makes it hurt even more--again--that she died. Because, gah!, when Sam tells her he's in love with her (present tense) during that last ghost!sex part, it's quite intense."[13]

[Twenty-Three]:"*sighs contentedly* This was unbelievably hot but also almost inexpressibly sweet. Plus the tactile and olfactory imagery--the sliding of the mud, the oozing, and the scent of the rich lake shore...all of that imagery was brilliant."[14]