Original Character Do Not Steal

"Original Character Do Not Steal" is an expression originating in Sonic the Hedgehog fandom and often seen on deviantART. While on occasion used literally to discourage fellow artists from stealing an original character idea, it is more often used ironically/humorously. When used to describe someone else's OC, it has the connotation that the OC is "either obviously copied directly from an existing piece of pop culture or so sloppily rendered no one would want to steal it."[1] It can also be used ironically by a fan about their own OC.

The meme phrase is believed to be originated by DA user Kurobon, in a 2008 joke deviation entitled "LOL PENIS THE HEDGEHOG":

ORIGINAL CHARACTER DO NOT STEAL

Yes, this is making fun of Deviations or "Art(>.>... )" that is created by gen8hedgehog's Male furry dollmaker thing. People, IT'S NOT F*CKING ART. MAKE your deviations, don't screencap them.[2] 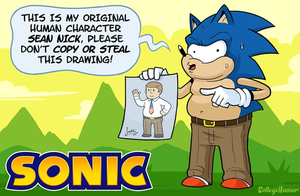 In 2013, CollegeHumor contributor Caldwell Tanner posted a gallery of cartoons "If Characters Acted Like Their Nerdy Fans" where a fat Sonic showed off his original human character "Sean Nick" and said "Please don't copy or steal this drawing!"[3]

it's like Disney trying to remake existing fairy tales in their own image, and then trying to copyright the original public domain material they used, because obviously, they own the concept of Alice in Wonderland or Beauty and the Beast, and any other telling of THEIR story or any other design of THEIR characters is just doing it wrong. ORIGINAL CHARACTER DO NOT STEAL![5]