From Fanlore
< Organization for Transformative Works
Jump to: navigation, search

The Accessibility, Design and Technology Committee (AD&T) is one of the committees involved in the Archive Of Our Own (AO3) project run by the Organization for Transformative Works. Its three subcommittees, Design, Coders, and Testers train AD&T volunteers, design and develop software features, and write and test the code for new features and bug fixes.

Coordinates software design and development on behalf of the Organization for Transformative Works. The main project currently occupying the Committee is the creation of an open-source software package, OTW-Archive[1], to build and support the Archive of Our Own. AD&T designs, codes and tests the AO3 software, advises the rest of the OTW on accessibility and technology issues, and supports Systems in ensuring the the AO3 site stays running smoothly. AD&T protects and preserves access to fanworks on the AO3. AD&T collaborates with many other committees, and works with Support for managing known issues, fixing bugs and considering feature requests from users; with Tag Wrangling for anything tag-related; with Internationalization & Outreach and Translation for preparing to translate the Archive, and for translating FAQs and news posts; and with Communications for news posts, admin messages, banner messages, and the AO3 Twitter accounts (AO3_Status, ao3org).


AD&T prefers all committee members to have experience as volunteers and recruits new members from the volunteer pools. AD&T is currently seeking volunteers for accessibility, coding, design, documentation, testing, and usability work. The Archive of Our Own is coded in Ruby, and we welcome volunteers of every level of experience. No technical experience is required for testing.

The AD&T committee and volunteers use a number of tools to communicate - mailing lists, Campfire chatrooms and chat transcripts, the internal OTW wiki, and the Google Code issue tracker and OTW-Archive code repository on Github. 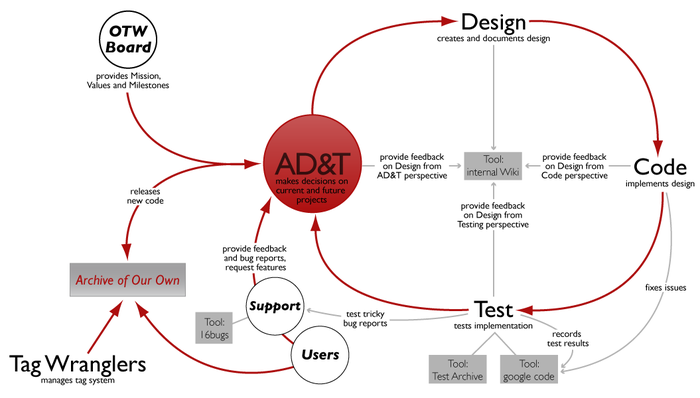