Omega is a Star Trek: TOS story by Suzan Lovett. 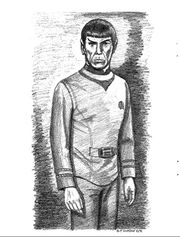 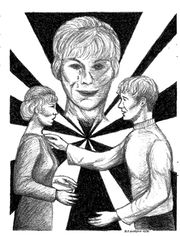 From the publisher: "Janice Rand has saved Kirk from a terrible fate - at a tragic cost to her own life. All she has left to do now is make one final goodbye."

"Perhaps you should reevaluate your decision to turn away visitors. Especially..." "No, Mr. Spock," she interrupted firmly. "I don't want to see him. He wouldn't be like you. I couldn't bear his guilt." Spock had no answer to that. He knew the irrational way the Captain blamed himself for everything that happened. He held out a small package. Janice reached for it and with a sinking feeling realized what it would contain. It was customary, and she had been expecting and dreading it. She turned it over in her hands, wishing it would vanish. "I can't accept this. I... appreciate it, but..." She tried to give it back. "Please return it with my thanks.""

A change of pace is kind of welcome after the grueling configuration of Antinomy. This is essentially a Rand story, but a very perceptive and self-sacrificing Rand. She is an experienced transporter chief and she does something extraordinarily heroic because she knows how much Kirk and Spock mean to each other. It’s short and well written – a nice breather. [1]

Janice Rand is disfigured while saving Kirk's life by transporting him against orders. Deciding she cannot live as she is, she buys a little starship, Omega, and goes off, presumably to die alone in the stars somewhere. But first, she goes to Thasus to talk to (but not see) Charlie (X) - having thought about his loneliness during her own lonely regeneration. Charlie insists on seeing her and is wildly distraught that she would leave him again. He does not see her as ugly, and he's filled out some himself. She takes him to bed and decides to stay with him. Kinda sweet little tale. [2]

'A Thing to Wear' [another story in R & R #18] and 'Omega' are less inept, but almost as offensive. The former finds the clothing synthesizer on the ship malfunctioning, so that we get ten pages of Kirk and McCoy lusting after bare bottoms. 'Omega' has Rand, disfigured after an explosion, running away to die or live in eternal solitude with Charlie Evans because -- horror of horrors -- now she's ugly. [3]