No Night So Dark 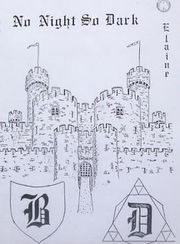 No Night So Dark is a slash crossover 116-page novel by Elaine Leeke. It was originally a circuit story.

In 1998, the author wrote: "'I was passed a copy of DIAL to read ... Reading through the letters, however, I came across someone asking how they could get to read 'No Night So Dark' ... I mention this only because I wrote it and I thought I would let you know that it is currently being re-written. "No Night" was one of the first things I ever wrote and whilst it was all right at the time, when I look at it now, I cringe a bit. My writing style has changed considerably over the years and although I think that "No Night" is one of the best story ideas I have ever had, I don't think I did the story justice in the writing of it. Because of this it is being totally re-vamped. Doyle is still the hot-headed healer/sorceror and Bodie is still the lord of the manor in waiting but I am adding a lot of other bits in and making it a bit more 'grown up.' Also, lots more Will and Nasir! 'There is also a sequel, tentatively titled 'Darkfall', which has been several years in the writing but should be finished next year." [1]