The Night of the Eagle

From Fanlore
(Redirected from Night of the Wolfen)
Jump to: navigation, search

You may be looking for Donna Gentry's Night Eagle Sentinel AU. 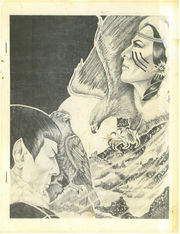 cover of "Night of the Eagle," art by Suzan Lovett 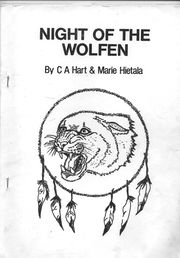 cover of "Night of the Wolfen," art by Karracaz

This is a 51-page gen Star Trek: TOS novel by Caz a.k.a Carol Hart & Marie Hietala a.k.a Fromthelandofoz Oz in 1985. This edition has a cover and interior illustrations by Suzan Lovett.

This zine, however, was first published in the U.K by Spotlight on Leonard Nimoy Fanclub 1984 as "Night of the Wolfen" (page count unknown) and also appears to have had an edition that was titled "Night of the Wolf" (72 pages, date unknown).

It has a sequel, Day of the Hawk.

Hiemal wolf-world is a bitterly cold planet with little to offer, except for research purposes. Commander Spock of the Enterprise sets off to visit a relative stationed at the research complex... and walks into the middle of a full-blown disaster. His only help lies in the survival knowledge of Keetah, an Apache woman. The escape from their situation, and in order to warn the Enterprise of their danger. Spock has to trust the judgement of a woman motivated by her need to exact revenge on those who murdered her friends. And her way of handling matters goes against the basic tenets of Spock's Vulcan philosophy! [1]

From Ingrid Cross and Joyce Tullock:

"The Night of the Eagle is a Spock novella. It came to us, literally, by one of those miracles of happenstance that befalls people of our trade from time to time. And while we're proud to present the talents of Marie and Carol to American readers, we know we owe thanks aplenty. To Marie and Carol, for sharing their adventuresome talent and love for Trek. To Johanna Cantor and Mardi Lamski for their cooperation and hard work. To Suzan Lovett: her illos are spirited and true to the story, and her talent joins with The Night of the Eagle to make it shine all the more. And this story does shine. Written and illoed by Spock fans, we know it is their hope that all who read it will enjoy!" [2]

Night of the Eagle Artwork

Night of the Wolfen

Night of the Wolf

This edition contains 72 pages, date unknown, was by Caz and Ozz, with a single illo by Carol Hart. It was available from Sylvia Billings in the UK.