From Fanlore
(Redirected from Muldertorture Anonymous)
Jump to: navigation, search

MulderTorture Anonymous (short: MTA) is an archive for X-Files fanfiction encompassing the physical, emotional and psychological abuse of Fox Mulder.

The page is still online but the last update was in 2000.

The archive featured a thematic MTA injury list, sorting the injuries into physical and psychological MulderTorture. Both categories had four subcategories and each of those had several subcategories of their own.

A 1997 Description and Bit of History

MulderTorture is described as "the physical,emotional and psycholgical abuse" of our favorite FBI Special Agent. And you'll find alot of it at the MulderTorture Anonymous FanFic Archive!

MulderTorture Anonymous is maintained by Shirley Smiley who, when she isn't busy being a mother to her 19 year old daughter, works as a restaurant manager in Massachusetts. Because she works nights, she gets lots of time to surf the net, especially since AOL is not terribly crowded at 2AM! Like me, Shirley prints out fanfic and takes them with her to work to read when things get dull!! [just kidding, boss!]

I'll let Shirley tell you about the site herself:

"MulderTorture Anonymous started out as a gripe between myself, Vickie Moseley and Esther Walker about the difficulty of finding good MulderTorture stories amongst the deluge of MulderAngst stories. That gave me the idea for the webpage. I started out with just a few stories of the authors I knew that had specific MulderTorture stories that I had read. Gossamer Webpersons; Natasha, Adam and Harri helped me set up the links as AOL only supports 2 MB of webspace.

After the announcement of the webpage at the end of March, I started getting all kinds of suggestions for stories from authors and X-Philes alike. Jad and Esther helped me refine the Rating System (it's still not perfect, though I'm trying) and Taura Johnson suggested the Sadistic MulderTorture Scale as a reference. Then Summer donated her '10 Degrees of Sadomulderism' and the authors started writing excellent MulderTorture within the last 2 months. The webpage now consists of 69 stories and is growing as the authors contribute and I am able to find and read and catalogue them. I try to do this on a weekly basis, but if there is an overabundance of stories, I'll do it more frequently. I would like to thank the authors and readers for keeping me on my toes and updating constantly. The authors have been great about letting me put their stories. Thank you all." 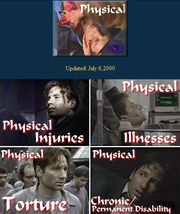 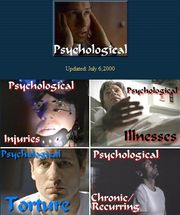 In 1998 and 1999, MTA awarded the Purple Heart Awards. Every fan fiction that was archived on MTA was eligible for nomination.