Misfits is a British science-fiction comedy television show about five young offenders who obtain supernatural powers after a mysterious electrical storm. The series aired on BBC E4 from November 2009 to December 2013. It is notable for its dark, irreverent tone and subversion of common tropes in superhero fiction. 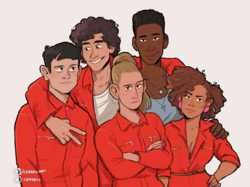 Fanart of the original Misfits cast from season one.

In the wake of a freak storm which imbues thousands of people with supernatural abilities, five delinquent teenagers must deal with the ramifications of their newfound superpowers. Although there is initially some animosity between the Misfits, they grow together over the course of the series.

The fandom is somewhat small and exists primarily on Tumblr, although there is some activity on Livejournal. Popularity declined in the years after the show went off the air.

Where to Find the Fandom