From Fanlore
(Redirected from Marissa Picard)
Jump to: navigation, search

The Marrissa Stories is a series of Star Trek: TNG fiction by Stephen Ratliff.

They are most known for other fans' reactions, including many, many MiSTings and responsefics.

Stephen, himself, is known for being a phenomenally good sport.

These stories are posted at Fanfiction.net. Ratliff's introduction there: "The Marrissa Stories are an idea that I started back in 1993. Quality improves with time, but bear in mind that the older stories are just not as well written as I can do today. It should also be noted that I have rewritten some of them, early in the time line, but I'm a bit constrained by some bad plot decisions I'd made early on, during these rewrites." [1]

FACTS: Stephen Ratliff's Star Trek fanfiction quickly became a favorite target of MiSTing. (If you've read his stories, or the MiSTings, you understand why. *grin*) The first several stories were MiSTed without his permission or knowledge. Eventually, though, he did find out about it. At first, he was upset. He came to RATMM and started posting. He was not...precisely well-received. So the relationship was rocky at first. But RATMM denizens soon realized that Ratliff himself was really quite a nice guy. And Ratliff realized that, while his stories were being MiSTed, it was done in a spirit of fun, not to denegrate him. The relationship warmed. Ratliff became a fan of MST3K, and the RATMM folks welcomed him into the newsgroup. He began to look forward to the MiSTings of his works--he actually wrote once that the MiSTings were the best form of C&C he ever got. And RATMM folks would be the first to admit that his writing definitely improved over time...though that didn't stop them from continuing to MiST it. *grin* [2]

The canon character is "Marissa Flores," a character portrayed by actress Erika Flores who appears on the TNG episode "Disaster." 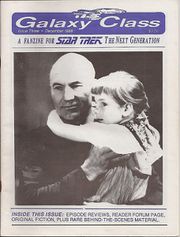 Marissa Flores and Jean-Luc Picard, on the cover of the zine Galaxy Class

Places to Find The Marrissa Stories

I highly recommend not reading these stories unMSTed. There's a link to the MSTings on the "Disaster" board.

More of the unsettling features, quirks, and horrifying moments of the Ratliffverse:

You can wipe out an entire fleet by flying between two stars really, really fast.

Half the Kids' Crew ends up married to the other half by the time they turn 20.

Ensign Ro's trial in "Premier Ma[r]qui[s]." And Ratliff's reworking of the Declaration of Independence" (don't ask).

The endless horse-racing scenes (again, do not ask). Sadly, this seems to be the only time that I get the impression Ratliff knows what he's talking about.

The "slaughter of Romulans" motif that recurs throughout the stories. It's how Marrissa celebrates her wedding, for God's sake!

The story in which the Pope comes to the rescue in his super-duper Popemobile.

And of course, the immortal words, "I was beaten by a bunch of kids."

I do agree with SWM that the Ratliff MSTings are great. One of the good things you can say about Ratliff (one of the few good things) is that he's a really good sport about it, which is part of the reason his stuff is such a phenomenon. [3]

The horror began in December of 1993, when a Computer Science freshman at Radford University decided to try his hand at writing Star Trek fan fiction. Inspired by the aptly-named TNG fifth-season episode "Disaster", Ratliff made the children in that episode his central characters. He then proceeded to conceive one of the most absurd premises in the history of Star Trek fan fiction: namely that the pre-teens of the Enterprise had gotten together and formed a unit called the "kids crew", commanded by twelve-year old Marissa Flores, a crack command team which can take over the Enterprise in times of emergency. Marissa's qualifications for command? It turns out she has a twenty-one minute time in the Kobayashi Maru simulation test, more than any other regular command officer (again, if you don't believe me, read the stories for yourself). After Marissa's security guard parents are both conveniently killed off in the first story, she becomes adopted by none other than Captain Picard. The stories, underscored by Mr. Ratliff's . . . um . . . rather creative spelling and grammar, only get zanier and zanier as the series (currently numbering some eighteen mini-epics), treats us to such mind-boggling events as a war-torn planet named "Sobnia", a doomed redshirt named "Ensign Throwaway", the revelation that Marissa is actually a royal princess, and a time-travel romance between Wesley Crusher and Chelsea Clinton (don't ask). The stories contain many laugh-out-loud moments and just as many moments that are profoundly disturbing. Mere descriptions or summaries cannot do this fanfic series justice. The saga was made more palatable once the Mystery Science Theatre 3000 discussion group got a hold of them, and wrote full-scale "mistings" with all of the regular MST humans and robots providing their usual running commantary. Although nitpicking these stories is not unlike kicking a cripple, certainly they provide much fodder for discussion and commentary, perhaps in the format of a support group for traumatized readers. [4]

Well, back in 1991, an episode of "Star Trek: The Next Generation" titled "Disaster" aired. In this episode, the Enterprise is struck by a pair of quantum filaments, knocking out many of the main systems. The main characters are scattered throughout the ship, and must deal with the resulting problems. In one subplot, the Captain is trapped in a turbolift with three youngsters he had been leading on a tour of the ship, their reward for winning a science fair competition. In an effort to calm them, he makes the children his 'crew', and leads them out of the turbolift. The eldest of the children is named Marissa (played by young actress Erika Flores), and after this episode, she never again appears on the series.

Flash forward to November 14, 1993 when a student at Radford University decides to begin writing Star Trek fanfiction. In his first story, he brings back twelve year-old "Marrissa" Flores. In the story, she is placed in command of the Enterprise while the major characters are on a mission. She and her crew of pre-teens single-handedly defeat a threat to the Federation. Unfortunately, her parents perished during the other mission, so Jean-Luc Picard adopts her, raising her as his daughter. Later, she discovers her father was crown prince of an alien world, making her a Princess. Of course, as she continues to save the Federation, Star Fleet decides to place her on the command fast track, placing her into command of her own starship at the ripe old age of sixteen.

After that, things get a bit wacky.

While all of this is going on, a group of MiSTies, fans of the TV show "Mystery Science Theater 3000", stumbled across the aforementioned stories. Like fans of other series, MiSTies write fanfiction. However, their fanfiction, which they call MiSTings, take the form of treating a piece of text as if it was the bad movie inflicted on the show's main characters and having them make fun of the text. It was soon decided the Marrissa stories were ideal misting material, and Stephen was gracious enough to allow his work to be publicly ripped to shreds.. As Stephen turned out more and more stories featuring Marrissa and her Kids' Crew, more and more MiSTings of these stories were written, until it became apparent there needed to be a central archive for these mistings. [5]

The revolution of the USENET group over a zine was that there was no editor or moderator to really control the quality of the submissions. Everyone read everything anyone posted, including a series of fanfics based upon the episode "Disaster" in TNG's 4th season. Author Stephen Ratliff remains alone infamous for taking the three children trapped in the turbolift with Captain Picard and launching a prolific series of episodes that most found to be a proper send-up of Star Trek's ills and holes. Until they found out that Ratliff never intended it to be a parody; he was actually writing seriously! Of course, the response was even more hysterical. These works were so awful that it became a habit of the denizens to poke fun at the every tale his published. They would organize and formed a unit of roasters in the style of Mystery Science Theater 3000 (http://home.netcom.com/~mblackwl/mst.html). Even today, his name invokes a shudder from those who remember, and if you ever have some spare time, I highly recommend reading the MST versions to save your sanity. [6]

I’m glad Keith brought up the oeuvre of Mr. Stephen Ratliff. His stories were always a mess of spelling errors (but hey, his “spell checker was on the fritz”) and colossal failures of logic. Sure, Stephen, the Kobayashi Maru scenario is a horde-mode videogame where survival time determines your score, just like they explain in the movie! Yes, the Enterprise-D would TOTALLY go back in time to bring the Enterprise-C into present-day Starfleet. Sure, it’s plausible for there to be a weapon that only knocks out adults. Still, Ratliff’s disasters (ha ha) seem quaint and charming compared to a great deal of the soul-crushingly awful fanfic (ESPECIALLY the pornographic kind) that’s out there. Those who have suffered through stories on the order of “My Immortal” will no doubt long for the hilariously stupid adventures of Grand Admiral Marissa Amber Flores Picard or whatever the hell. [7]

Star Trek is an accurate representation of our future, from ‘Time Speeder’ by Stephen Ratliff.

For those who don’t know, Stephen Ratliff is best known among the fanfic community and the fanfic MSTing community for writing a series of Star Trek: The Next Generation fanfics starring Marrisa Amber Flores Picard. Now, Marrissa was a one-episode character, a twelve-year old girl who was stuck in an elevater with Captain Picard in the episode ‘Disaster’ but managed to help Picard out during the situation. Ratliff decided to make her the main character of a series of fanfics in which she saves the day along with her ‘Kid’s Crew’ (many of whom were also one-episode child characters).

The first was ‘Enterprized’, where she humilates the Cardassians in a starship battle, but her parents die. As a result, Captain Picard adopts her. In the ensuing fics, in which the adults are basically useless and Marrissa and the kids’ crew are the ones who save the day, Marrissa gets promotions and by the time she’s sixteen she has command of a starship.

All this, of course, is spectacularly ridiculous. But then we come to a fic even Ratliff considers to be the worst of the Marrissa stories. It’s ‘Time Speeder’, where Marrissa and the Kid’s Crew are chasing a fugitive back in time to the mid-1990s. There, she meets with Wesley Crusher, and many 90’s politicians. This would include Bill Clinton, who, in the Ratliffverse, is an avid Trekkie.

Now I know what you’re thinking. How can Star Trek the television series exist inside a universe based off of the Star Trek universe? Don’t worry. Ratliff has Wesley Crusher supply an explanation. [9]

Some MiSTings and Other Fanworks Based on The Marissa Stories