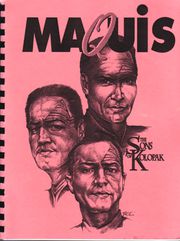 Maquis is a gen Star Trek anthology. The title comes from the name of a coalition of Federation rebels featured in DS9 and Voyager. [1] This A5 zine has the subtitle: "The Sons of Kolopak."

Orion Press' new "resistance fanzine" was such an EXCELLENT 'zine!

EVERY story was good! As expected, since the subject matter concerns persons who rejected the Federation in favor of murder and mayhem, the stories are not exactly comedic, whimsical, or "cute". They ARE serious, sometimes dispiriting, involving mature situations and circumstances. I recommend this 'zine not just for fans of the particular Maquis characters, but for anyone who enjoys well-executed drama. Once again, BEKi did the cover artwork - a portrait of Chakotay and his younger and older brothers. To lighten the sober mood just "a little bit", editor Brenda Shaffer-Shiring included her filk, "Vulcan Agent Man".

"The Sons of Kolopak" by BEKi and "A Rude Awakening" by Charles H. Shiring both offer opinions on how and why Chakotay made the choice to go from decorated Starfleet officer to wanted outlaw. Both were good expositions into the character and into possible scenarios that, based on the lack of canon information, were quite conceivable. The difference came in the environments. In "The Sons...", Chakotay the Individual returned to Dorvan V for his father's funeral and had to deal with his people's feelings that he "forsaked" them for Starfleet. In it we saw BEKi's Chakotay that had been intimated at in the show, but never seen [except for her "Assimilation"]. In "A Rude...", Chakotay the Officer returned to Dorvan V after his father's murder and saw and experienced firsthand why choices were and had to be made.

"Parameters" by Robert J. Stouffer was a very interesting story which took place in an alternate ST:VOY universe and indicated how things COULD HAVE turned out before and during "Caretaker".

"Charting a New Course" by Kathleen Speck and "The Needs of the Few" by Brenda Shaffer-Shiring were both introduction stories relating how Captain Kasidy Yates and Lieutenant Michael Eddington, respectively, got involved with the Maquis. Kasidy's entrance was pretty much uncomplicated as someone made her an offer she wouldn't refuse; but the story itself provided worthy insight into the character that has yet to be seen on the screen. Eddington wasn't so lucky as HIS tete-a-tete forced him to question who and what was right in this darkened account of events.

"Big Lesson, Little Package" by Dianne Bellomo was a really nice tale about a young girl who decided AGAINST joining the Maquis, after learning what was expected of her, and after meeting Ziyal.

Finally, there was "Habeas Corpus" by Gill Marsden, a novelette featuring Sito Jaxa, Tom Riker, and Ro Laren. After escaping, Sito and Riker headed for Ro's Maquis cell where they had to make choices. This story was the best. Its length allowed for full explanations and descriptions and satisfying character development.[2]