Like a Tear Cast in Stone is a Kirk/Spock story by Kathy Resch. 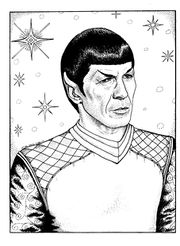 illo by Caryl Sibbett for the zine story 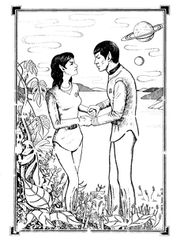 illo by Caryl Sibbett for the zine story

It was published in the print zine In the Wilderness #1.

"A Vulcan female recently posted to the Enterprise has difficulty accepting human behavior and Spockʼs seeming betrayal of Vulcan by bonding with Kirk."

For Like a Tear Cast in Stone I wanted to take on the challenge of writing from the POV of an “unreliable narrator”—someone whose perception of events is skewed from reality. The reader needs to understand more than the narrator of the story. The main character, a Vulcan woman named T’Prayd, is deeply flawed, enmeshed in self-deception, ferociously jealous of the relationship Spock shares with Kirk, but unable to admit that what she is experiencing is emotion. The challenge, of course, is to make it clear to the reader what the facts truly are, and, hopefully, to have her learn something from what occurs in the story. [1]

This is a brilliant character study that creates sympathy for a protagonist with a rather unsympathetic viewpoint. Many K/S writers seem to be afraid to deal at any great length with the idea that there would be Vulcans who don't have a positive attitude about K/S—like T'Prayd. The existence of someone like T'Prayd shows that full. Vulcans aren't perfectly logical. They have unconscious emotional motivations that bring about prejudices and inner conflicts. I find such Vulcans much more interesting than Utopian ones who are perfectly reasonable and tolerant. None of the Vulcans we saw in the series seemed perfect to me. In fact, I wouldn't be surprised if T'Pring turned out to be quite similar to Kathy's T'Prayd in outlook. I also just loved the idea of the Vulcan crew members organizing to make sure their food was "kosher" from a Vulcan standpoint. That was quite believable. I did find it jarring to learn of a Sarek and Amanda relationship that isn't bonded, however. Jean Lorrah's NTM stories with all the lovely telepathic interplay between them are far too vivid in my mind. Nevertheless, this concept of Sarek and Amanda having a totally human relationship did make a very good point—that telepathy isn't necessary for a great love to exist. There can be wonderful loving relationships between non-telepaths. Humans have managed it for centuries. [2]

Several of us at Shore Leave talked about this story by Kathy Resch. She seems to have a real gift for the "observer" tale, and this is one of the absolute best ever written. It seems on the surface as if very little happens here, but it's a dazzling journey through one person's way of looking at the worid that is so masterful ifs almost dizzying.

A Vulcan woman, T'Prayd, is assigned aboard the Enterprise along with her bondmate and several other Vulcans. She is working in the sciences directly under Spock's supervision, but she has nothing but scorn and disgust for him—except that she does not categorize nor understand her own emotions. Here's a sample of her proper Vulcan thinking:

"I watch him leave. He walks away in absolutely correct military bearing. How very proper he is, when he is around fellow Vulcans. How schooled he is when he speaks to any of us. It is as if he were completely unaware of how we regard him. Such mastery would be admired, in another. Perhaps he hopes somehow to redeem himself by form when he has long departed us in substance."

In this paragraph T'Prayd implies that the other Vulcans on the ship share her perspective, but we soon leam that they do not. Only she, it seems, refuses to consort with the humans with any ease, and it is only she who is so disturbed by Spock's presence in her working hours.

And there is more. T'Prayd shares a sterile life with her bondmate, who has minimal telepathic skills. They have gone through two pon farrs together, but they rarely communicate on any level.

Instead, T'Prayd is haunted by disjointed speculation about the union shared by Kirk and Spock. Even in meditation, she thinks, "Kirk is rapt. He is ecstatic. Spock's hands areupon him. They fondle. They kiss. They caress. They have forsaken their clothing. They are rigid with want. They—" And then, a page later

"What is it like, for a Human? For him and Spock? Why do these thoughts continually occur to me? I am most shamed."

Spock includes T'Prayd on a landing party that will stay overnight on the planet for the first time, and while she is eager to go, she is also filled with trepidation. Will Spock find her worthy? Will she be very uncomfortable in the company of four humans? And while she's on the planet, she wonders 'Will Spock and Kirk mate here? Should I stay awake and listen for telltale sounds?"

Eventually her voyeurism reaches a climax of emotion, of longing and searing loss that overcomes her. And it is the Vulcan whom she scorns, Spock, who shows her how she has been consumed by emotion. He also shows her a way out of her unhappiness.

I can't praise enough the subtlety and skill with which this story is written. This is one you just must read for yourself to appreciate. Give it a try! [3]

Although this story was originally published in 'In the Wilderness' 1, since I never owned that particular zine, it was a very rewarding surprise when I discovered the author had contributed it to this year‘s K/S Advent Calendar. And all I can say is what an absolutely wonderful Xmas present this was for me and based on the feedback this story has garnered thus far, I‘m not the only one who feels that way.

For this story, the author has chosen to use a style that is perhaps the most difficult of all when it comes to writing not only a K/S story, but any story for that matter – in the first person. And to make it even more difficult, the first person POV she chose is a Vulcan and not only that, a female Vulcan. Talk about a challenge! Yet it is no surprise to me, given this author‘s tremendous talent, that not only did she pull it off, she just happened to pen one of the best K/S stories I have ever read. The events in this story take place right after TMP. A group of Vulcans is now serving aboard the Enterprise, including the narrator of this story, Lieutenant T‘Prayd. She has been assigned to the science department, which puts her under the direct command of Spock. And while she accords him the proper respect as her superior officer, that is where that respect ends. His human blood is a source of repugnance for her and worse, the fact he is bonded to a human, his captain no less (a fact that is well-known to the crew), only lowers his standing as a Vulcan in her eyes. Given all that, she cannot help but wonder ―How can he maintain existence and functionality, living as he does as a cultural outcast?‖ In contrast, she considers herself to be the perfect example of a Vulcan, properly bonded to a Vulcan male, who is also serving aboard the Enterprise, and striving each moment of each day to conduct herself as a proper Vulcan should. Yet her obsession with Spock and all his flaws only ends up revealing the flaws within herself, flaws that are revealed through an unexpected and telling encounter with the very being she feels is not worthy of existence. It is his wisdom and his understanding that allow her not only to find some true peace within herself, but to also see her relationship with her own bondmate, one that was very proper and as a result, very cold, in an entirely new light.

This story is brilliant in so many ways, but for me personally, the one thing I enjoyed the most was the fact it proved a point I have firmly believed all these years I have been involved in this fandom. Because we are seeing the events in this story unfold through T‘Prayd‘s eyes, obviously we‘re not going to see Kirk and Spock having sex or even really engaging in any passionate interaction with each other. Yet those subtle glimpses we ARE given of the love these two share is more than enough to satisfy. It just goes to show what I‘ve said all these years – K/S is not, has never been, or ever will be strictly about the sex. And I thank the author for writing a story that gives us a wonderful, unforgettable example of that. [4]

"Like A Tear Cast In Stone", narrated in the first person and which competently deals with the thoughts and growing awareness of a Vulcan female, Lt. T'Prayd. At first scornful of human emotion and feelings, she learns through Spock and his relationship with Kirk, to reach out and grow. I thought this a touching and thoughtful piece of work. [5]