From Fanlore
(Redirected from Laverne and Shirley)
Jump to: navigation, search

Laverne & Shirley was a spin-off of Happy Days. 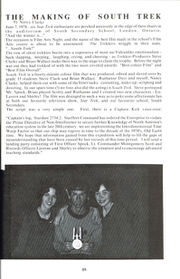 from "The Making of South Trek," an article by Nancy Clarke, published in Canektion #2, Mr. Spock, and Lt. Laverne and Lt. Shirley

The show focuses on Laverne DeFazio and Shirley Feeney, two friends and roommates who work as bottle-cappers in the fictitious Shotz Brewery in late 1950s Milwaukee, Wisconsin.

Fanworks about this show are very scarce.

Some fans use this show, along with Cagney & Lacey, as examples of the lack of female friendships and relationships offered on the screen, as well as its general quality.

What is there now-a-days to inspire a fandom? Plastic worthless blaah. "Laverne and Shirley" won't have any conventions or fanzines, ever. [2]

One reason is that we don't value female friendship because our culture teaches us to devalue everything women have (except physical items depersonalized into icons). Pop culture merely reflects this. There are plenty of idealized male-male friendships on TV, but what female-female friendships do we see? Laverne and Shirley, some ideal! [3]

Another fan in 1980 also wanted to know why there were so few shows that focused on women:

[Why so few] woman relationship stories? Would we as a woman’s fan group watch them or are we only geared to watching men? The only woman’s relationship show seems to be "Laverne and Shirley." I don’t watch it because it is to me, too silly." [4]