"The Fenris twins had a connection we still don't understand. Their power fed off each other. It was said they even shared their dreams. It was like they each had half of the same mind."
canon, Madeline Garber, 2x08 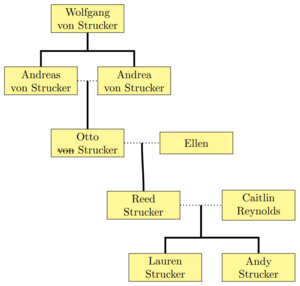 Lauren and Andy are the great-grandchildren of Andreas von Strucker (their grandfather Otto being Andreas's son).

In the comics, Andreas canonically has an incestuous relationship with his twin sister Andrea. In The Gifted this is not explicit, but barely. Otto talks about how "they [Andreas and Andrea] raised him." Hid old photos are all of either Andreas + Andrea, or Andreas + Andrea + Otto. The show usually uses the phrasing "your great-grandfather and his sister," but no mention is ever made of the baby mama this implies. There are two notable occasions when Madeline Garber and Reeva Payge respectively refer to them as "your grandparents" when talking to Reed.[1][2]

[sandalaris, Jan 5, 2022[3]]
It's a minor thing, but the show does confirm in a roundabout way that the original Fenris, Andreas and Andrea, were canonly together. It's definitely a "let's just slip this pass the radar with a casual off-hand mention that they are both Reed's grandparents while talking about how worried we are that Andy and Lauren are going to be like them."

Lauren and Andy inherited the same powers as Andreas and Andrea, called "Fenris." Many of the conversations about their bilateral superpowers could be read as conversations about a romantic relationship, if one lacked knowledge of the context. "We're the only ones who really understand each other. I know you feel it too."

Their shared powers are activated by them holding hands, and describe the experience as, "There wasn't two of us anymore, there was just one." When they're separated — as they are for much of season 2 — they pine for each other in a way that goes beyond simply missing each other.

Andy: You're wrong Lauren. We're meant to be together. Fenris is our destiny.