Klandom is term used by fans to describe fans, fanworks, and canon they feel is racist. In non-fandom contexts, the term means "The whole body of Ku Klux Klan members"[1]

"Honestly there are some days I think creating the word “klandom” is over the top, an exaggeration, my own way venting my frustrations against ridiculous amount bullshit I see on this godforsaken website.

But then…I see a particular post…the rabidness, the glaringly obtuse and forgetful. I see the hypocrisy, thee misogynoir, the erasure, the almost methodical movements of these individuals. Instead of cloth, they have computers. Their identities shielded just enough that anonymity works in their favor.

They’ve got it down to science, a readable script of dialogue. What’s more people from different fandoms move from one show to another. They pour their poison, and the whole thing gets diluted, the slander actual people. They ignore actual life experiences just so they have some claim to a iota of power on a (once again) godforsaken website.

If I wasn’t so emotional drained by it I’d laugh. If I wasn’t in a position of marginalization I’d find it interesting. I’d probably track it, take screen shots and compare and contrast. Because only then I would have the energy to complete such tasks.

So I guess instead of that all I have is a word. a single word that brings together all of my frustrations, the history of these racist violent mob like antics, It’s a very encompassing word. Giving a name to it, gives me a little piece of mind. It allows me to speak more succinctly about it. For others to talk about it. It’s a microcosmic way to talk about racism and how it is in a larger setting."[3]

Some History and Explanation

It’s simply just a combination klan (as in the white supremacy group) and fandom. Instead of white hoods they use computers and the anon feature.

I initially came up with the term around the time CATWS came out and the MCU (a Stny BNF) decided that Sam was likely to be HYDRA because why would Steve trust someone he just met and instantly connected with over Tony who he doesn’t like/can’t stand? The MCU fandom, as most fandoms, started taking to it and the demonization and erasure of Sam Wilson began. From the headcanons about him being asexual with the purpose to not give representation to people who are actually asexual but merely to keep him away from Steve or any other white fav (because you can only be in a relationship if you have sex with the person right?). To the fic/fan art erasure where Sam is only a means to an end for another ship (mostly stny or stcky) or to be some sort of magical negro type trope only there to service and help others with no thought to himself or his needs.

Moving on to now, i’ve just started using it as a personal tag for fandom fuckery in general. It lets me vent will keeping out of the tags so much.

I’m glad (and sort surprised) that it’s catching on.

The hive-like attacks of on oppressed groups that fandoms like to do are, in my opinion, are like modern day klan/racist attacks. Of course they don’t use old slurs as a much but everything has now become coded and subverted.

An example, the small group of Ichatrina fans calling Ichabbie fans “thugs” not just to our face but to the SH show runners/writers. Another would be the HP fan artist that said that people couldn’t headcanon Hermione or Harry as poc because “it goes against canon and that’s not right”.

Fandoms are toted as fun, safe spaces but that is not true for all of us. Some of us are constantly fighting to keep our safe space just that…safe.

The term “klandom” and its variations is an attempt to name the constant harassment towards oppressed groups from the unsavory parts of fandom. [4]

Thoughts on Its Use 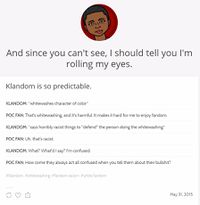 tumblr gifset from May 2015. Title: "Klandom is so predictable"

The name given to any fandom that is racist.

like the MCU Klandom who seems to hate every character of colour ever and turns Hail Hydra into a meme."[11]