Jedi Princess is a gen Star Wars fanzine novel by Nancie Renee Grove. It was published in 1986 (reprinted in 1992) and has 69 pages.

The art is by Nancie Renee Grove. 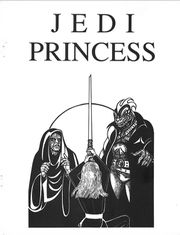 The saga of the Emperor's Daughter continues in the exciting sequel to Legacy of the Emperor's Daughter by Nancie Renee. Journey to the psychic realm with the Skywalker twins and Renee in their desperate hope of rescuing the soul of Ana Skywalker. But the Emperor has returned in spirit from and is keeping his granddaughter imprisoned in darkness. And is it the final chapter of Princess Palpatine and the end of all she fought for in the name of the Force? [1]

From Star Wars Zine Bibliography: "Ana Skywalker trapped in an alternate plane of existence by her grandfether, the Emperor. Help comes from her mother, Luke and Leia."