For the song popular in vids, see It's Raining Men (song).

It's Raining Men is a slash multimedia fanzine.

It's Raining Men 1 contains 186 pages. The color cover is by Geli. It was published in October 2000. 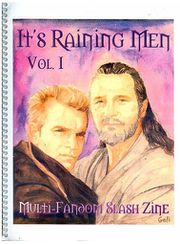 It's Raining Men 2 was published in October 2001 and contains 197 pages. The color cover is by Geli.

It's Raining Men 4 (multi/) My current obsession, CSI Miami :) The 4 stories in this are far too short (my only complaint :) but they're incredibly true to voice. And hot, too! :) I've had this since MediaWest - spent a great deal of time at MediaWest just re-reading those 4 stories. I'm STIll re-reading those 4 stories whenever I get a chance. And I did read the rest once I came up for air - the SG1 stories are incredibly hot, the Highlander/Beauty & the Beast was not only good, but unusual, the Tombstone one is very sweet and the rest are very good even though I'm not into the fandoms. And did I mention the 4 CSI Miami stories? :) [1] 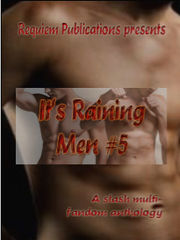