Indecent Exposure is a slash X-Files fanzine. It was published in 1999 and has 140 pages. The second edition was printed in 2002 without art.

The cover design is by Bernice, the M/K snapshot by Killashandra. 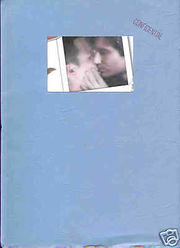 overlay over of issue #3, under cover 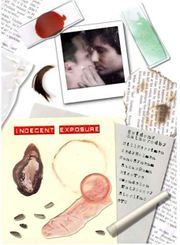 detail from the back cover, the warnings

The reason for the lack of art: from the artist, Bernice: "I had little to no feedback on the art from that zine so I'm not putting it into future issues. I think it's just a waste of paper to most folks." [1]

All stories feature Krycek. In addition to the stories it includes poetry by Gwendolen and Sterling and art designs by Killashandra and Bernice.

This Zine, Slash, and Visibility

The publisher of the zine may have been unhappy with the ever increasing visibility of slash fan fiction in the public eye and the disintegration of the Fourth Wall. On the front page of the second edition (and perhaps the first?), she prominently posted the following:

"This zine is not to be given to journalists (in particular Cynthia Brouse or Veronica Cusack), actors, producers or anyone else involved in the entertainment/media industries. Please do not refer to this zine in any public forum without the express permission of the editor."

This is in reference to several cheeky, and often insulting, articles about fandom and fans for a major Toronto newspaper by Brouse that were written in 1998 (Internet Authors Put TV Buddies in Unusual Romances) and 2000 (Gross encounters: on the way to writing a profile of Paul Gross, the author discovers his fans are the real story. Reflections on celebrity worship, Internet love and Canada as the Holy Land).

However, given the publication date (1999), slash fandom, and X-Files slash fandom in particular, increasingly inhabited the public online spaces. In fact, right above this prohibition was the publisher's website address in bold letters where she openly advertised the fanzine.

Double eXposure was very warmly received by the fans, and I hope you enjoy this issue just as much. There's a real mix of stories in this issue; short and sweet, not so sweet, and long, slow and thorough. Just how we like our men! If you enjoy these stories, please drop us a line. Have a look at the terrific Letters of Comment at the back of this fanzine. Heart warming! This is what keeps the authors writing - without your letters, notes, or emails, we all just give up. Oh, and remember to check the warnings in the back of the zine if you're the delicate sort.

This series has been very successful so far, and I am keen to keep doing more X Files slash zines. If you are interested in becoming a contributor to Over eXposure, drop me a line or send an e-mail.

As per other zines in this series, the luckless "Gwendolyn/Gwendolen/Gwendolin" has their name spelled several different ways in this issue.

The editor of IIBNF zines likes to keep at a fairly low profile, so I'm not going to say much about them. I do enjoy the series. I find it a joy to read. The humor might not be for everyone, but if you're in the mood for something a little different, then try these. [2]