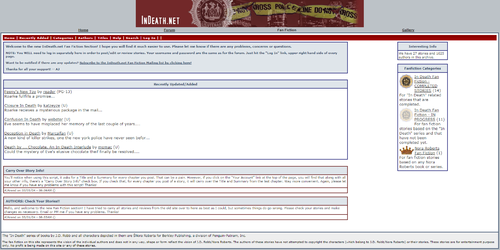 A screenshot of the InDeath.net Fan Fiction archive homepage, dating to August 14, 2004.

In December 2017, it was announced that InDeath.net Fan Fiction would be moving to the Archive of Our Own as an Open Doors Project.[2]

See more on this topic at Nora Roberts' Attitudes Toward Fanfiction.

On 15 December 2014, InDeath.net forum moderator AJ posted a new thread to the InDeath.net Fan Fiction subforum entitled, 'ATTENTION ALL: FAN FICTION HAS BEEN SUSPENDED'.[3] In the thread, they explained that the InDeath.net site would be closed to fanfiction due to the wishes of Nora Roberts, the In Death series creator:

As you all know, in recent months, at the request of Nora Roberts herself, there has been a "crackdown" on our fan fiction rules. A few stories that did not strictly fit our fan fiction guidelines were deleted and the moderation team had tried to become better at enforcing the rules in order to try and keep the fan fiction going here.

Unfortunately, it seems that Nora does not feel that the rules posted are enough and that the moderation team has not done enough to enforce the rules that we have. Yesterday I got a PM from Laura, Nora's publicist, who passed on a note from Nora that stated in part:

While I've, with few exceptions, left the fanfic on your site alone, in the several months I've had to monitor. This, as you know, became necessary when stories having Eve or Roarke raped were put up. When stories that had nothing to do with the canon or completely disrespected and bastardized the characters were put up....You have guidelines in rules in place, but they simply aren't being enforced....This is extremely upsetting to me as the writer of the series, and as I've said before I must protect my characters and my work.

I simply don't have time to monitor the fanfic on indeath.net. I ask you, respectfully, to stop publishing it on the site. I'd hoped I wouldn't have to ask this, but I must, and you indicated if I ever asked, you would respect my wishes. I'm counting on that.

Nora is right, in that...I have said many times in the past that should she request it, I would shut the fan fiction section down. So, it is with this in mind that I have suspended all fan fiction posting here on indeath.net. Past stories will still be available, but no new stories will be permitted.

I apologize to everyone who is a fan of the fan fiction here, and wish there were something I could do, but my hands are tied.

If you are a fan fiction author, and have questions or concerns about a story that you have written here or are in the process of writing...for example, if you do not have backups for some reason, please contact me or any member of the moderation team and we will help you if we can.

Again, myself and the moderation team here am/are very sorry that it has come to this. We sincerely want to thank all of our fan fiction authors over the years and we encourage you to continue writing...be it fan fiction for another series, or your own stories. You are more than welcome to post here on the forum if you have fan fiction or your own fiction written elsewhere.

Thanks again for all your hard work, support, encouragement, creativity and love for this series and its characters over the years.

The announcement was met with sadness by the community, but many fanfiction authors supported what they saw as Nora's right as a creator to maintain control of her characters, and respected AJ for following her wishes.

I have enjoyed many of the fanfics over the years, as well as been quite disturbed by a few. It's unfortunate that this had happened, but Eve and the ID world are Nora's to do with as she chooses and her wishes must be respected. I appreciate the integrity to adhere to Nora's wishes. Keeping one's word is not as prevalent as it used to be. Kudos to you AJ.[4]

It seems like the folks here have gone above and beyond trying to meet what I consider unreasonable requests by an older author who hasn't gotten with the modern times of new media. However, there appear to be other sites around that one can share fic. I would recommend folks move to them.[5]

A brief discussion started about fanfiction and copyright violations and an author's right to prevent fans from publishing fanfiction of their work, before AJ locked the thread in order to prevent further debate.

On June 17, 2017, two and a half years after InDeath.net Fan Fiction was closed to new stories, AJ posted an announcement to Forum In Death, the new location of the InDeath.net community, saying that they had been in touch with Archive Of Our Own about preserving the fanfic that was published to the archive:[6]

Since I’ve closed InDeath.net, I’ve been looking for a way to archive the existing fan fiction that was posted there. A few members have suggested I get in touch with https://archiveofourown.org/.

So, I sent them an email and they answered back that they would love to help us archive our Fan Fiction! So I am in the process of archiving everything with them. In the meantime, I encourage you to check out their site if you are a fan of fan fiction.

I will let you all know when that archive is complete.

AJ later confirmed that the import was in progress and an announcement would be officially published to AO3 on December 4, 2017.[7] As of May 2019, the import was still in the Open Doors queue.