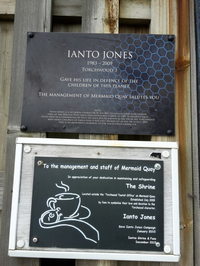 The two plaques dedicated to Ianto Jones, located next to Ianto's Shrine.

Ianto's Shrine is a shrine dedicated to the Torchwood character Ianto Jones, created as part of the Save Ianto Jones fan campaign and located in Mermaid Quay, Cardiff. The shrine was built in 2009, following Ianto's death in the Torchwood episode "Children of the Earth". Although it was an impromptu build by an unknown fan, it was soon expanded as numerous fans came to leave gifts such as dedications, flowers, coffee cups and teddy bears at the shrine. In 2010, the managers of Mermaid Quay officially recognized the shrine by erecting a permanent plaque, and in 2015, the Save Ianto Jones campaign and the group Ianto's Shrine and Friends erected a second plaque beneath the first, thanking Mermaid Quay staff for their safeguarding of the shrine. In 2017, a new top sign was created for the shrine.

[Ed Jefferson]
I came across it entirely by chance a few years ago and was mesmerised. There are photos, drawings, flowers, poems, essays. There are messages from all over the world – in just the ones I took pictures of, I can see mentions of Spain, Finland, Russia. Someone’s sewn a tiny version of Ianto’s suit; someone else has hung up a tie.[1]

In a 2014 blog post, We Are Cardiff shared images of the shrine, which featured images, dried flowers, and other items left at the shrine.[2]

Many fans regard the shrine with deep affection, and love the idea that brought the shrine to life.


It makes me happy to remember that there is a literal /shrine/ to Ianto Jones in Cardiff. I love that we cared so much for this character that he has left a physical mark on our world. He was so important and I love him v much.[3]

Yes, it´s a shrine for a fictional character - well in Bremen we only have the Town musicians. And you are not supposed to leave a note or a love letter to them, but here you can do so and remember all the good times you have had with Ianto and the team.
What a briliant idea![4]

Some fans are somewhat bemused by the shrine.


"The Ianto Shrine!! It will take you 4 seconds to see it, because you get there and you see one poem that’s all about Ianto and Jack fucking each other and then you leave, feeling sullied, but it’s worth a look simply for how weird it is. People still leave flowers there to this day. Many tourists think that it’s a real shrine, and you can see why; it’s eerily well kept. "[5]

Due to the age of the shrine, and the materials used in its construction that have now become damaged, some have stated that they'd like to see the shrine taken down.

I know it's just a bit of fun, but it must be time for this to go now? There's a lot of history in this area, maybe an informative display on the port would be a nice idea. Sometimes when passing people ask me who the shrine is for and what happened and look very confused when I tell them it's a fictional character![6]

I’m sorry but it’s time to remove this “attraction”, it pulls the waterfront area down. It’s not maintained, it’s just a shabby bunch of water damaged letters and photos. I know there are people who feel passionate about it but Torchwood was just a TV program. Get rid of this eyesore, Cardiff Bay is a vibrant place and this shrine is not befitting of the area.[7]

But some fans are impressed with the staying power of the shrine, and are proud that the shrine has lasted all these years.


If creating and maintaining a shrine for a fictional character for the past 8 years doesn’t show the power that a fandom can have I don’t know what does.[8]


I’m not sure if anything will ever quite match the pride I feel as a member of the Torchwood fandom for when we collectively lost our shit so hard that we created a shrine to one character and, seven years later, it’s still there.[9]