You may be looking for Not in Kansas Anymore, an OZ (HB0) zine.

I Don't Think We're in Kansas Anymore! is a 186-page slash Smallville anthology of fiction by Creed Cascade and TJ. It was offered in both print and CD format. 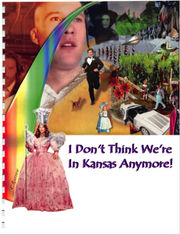 Thank you for purchasing this zine on CD. We hope that you find it as enjoyable to read as we did to write it. The zine is done with MS Word so as long as you have that program you shouldn't have any problem reading the material on the disk. We've also included the cover art for the zine as a jpeg file so you don't miss out on that.

We've also included the Tempus Sans font file. The headings and such were done with this font. If you don't have it you'll need to install it to better read the zine.

Letter from the Editors

It's hard to resist those big doe eyes and shaggy mop of hair, especially when they seem to follow a certain bald hottie around. The relationship between Clark and Lex Is purely dynamic from that very first kiss of life. We wanted to capture a spectrum of different possibilities that relationship could take. But no matter the twists and turns we take the boys on, In the end, we always know they love each other. We like to think our writing partnership is nearly as iron clad.

We believe that writers should not be censored and this zine Is a result of that belief. We wanted to explore the very limits of these characters, forever stretching the boundaries. There's no point In sugar coating the lives of characters when real people don't have the luxury of a backspace button. Some of our stories aim to make you think, laugh and cry. If we've done our job correctly, all of our stories will challenge your perceptions of "traditional" relationships.

We want to thank the artists and beta readers who helped us with this project. For the artists, your talent brings our words to life and for that we thank you. And we are most certainly grateful to our readers for the encourgement [sic] you've given us.

Many thanks. Creed Cascade and TJ

"We don't suffer from mental insanity, we enjoy every minute of iti"

If you enjoyed what you read, we encourage you to send us feedback:

Or send It to us on the Internet at: asylumpress@hotmall.com