This article is about the fansite. For the fictional location, see Hogwarts.

Hogwarts School of Magic (HSOM) was an early Harry Potter roleplay site. It closed in March 2002.[1]

In March 2003, Emily Tesh wrote about her time on staff at Hogwarts School of Magic in a post at fandom_history.[3] According to Emily, the site reached its peak in mid-2001. 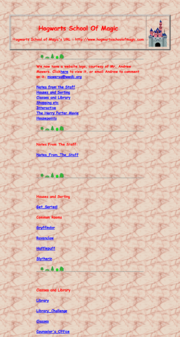 Partial screenshot of the site as archived on August 1, 2001.

The site was founded by Headmistress Abby (also known as Molly and DameChina) and Andie.[1]

According to Molly's 2001 anniversary post, the site was opened in November 1998.[4] However, no information about the site prior to mid-2000 has been preserved.[5]

Starting in August 2001, site updates were posted to hogwarts_team on LiveJournal.[6] From February to July 2001, updates had been posted on a separate Expage page.[7]

Molly first posted on February 25, 2002 that she would "most likely" be closing the site, due to lack of staff and activity.[8] She officially announced the closure of the site on March 4, 2002, although she left open the possibility of someone else taking over the site.[1]

The "School Library" section of the site contained three sections: the Archives (past versions of the site newsletter), the Fiction Section (fanfiction submitted by members), and the Reference Section ("non-fiction" about the Harry Potter universe, written from an in-universe perspective).