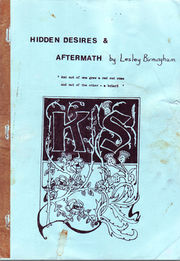 Hidden Desires and Aftermath is a slash 184-page Star Trek: TOS novel by Lesley Birmingham, published in the U.K. by D. DaBinett.[1] The cover is by Virginia Lee Smith and the interior art by Sandra.

From Gilda F: "Following a precarious mission to a mysterious planet, long submerged feelings between the captain and Spock explode, with unexpected consequences and shattering results."

HIDDEN DESIRES has Kirk & Spock on a survey of the planet Lelar. It transpires that a creature lurks on Lelar that thrives on the lustful desires of its visitors; it needs to experience the extreme sexual arousal of others & their accompanying emotions in order to grow & reproduce. It uses the Captain and his First Officer in its bid to gain nourishment, at one occasion causing them to mate most violently. A long description of this tortuous process ensues & only after some time does Kirk succeed in destroying the alien and rescuing Spock from the planet, only to find the Vulcan a stranger.

AFTERMATH continues with a shuttlecraft crash in which Kirk, McCoy & the Vulcan are stranded. Spock has isolated himself from his friends & has formed an invisible barrier against his Captain. The trio's attempts to survive against the odds are lavishly depicted with ornate descriptions of suffering, misunderstandings, tender caring, unpleasantness & desire. All three take turns to suffer, then to offer caring attention to one another. And therein lies the zine's greatest weakness. The atmosphere is always emotionally laden; so much so that there is no feel for shadow; no light against which the dark can be compared & appreciated. The plot unfolds on one continuous note, persistent & bordering on monotonous in its insistence that the characters play the hurt/comfort game. Because of the lack of contrast, there was equally a loss in individuality between the three main protagonists. Each acted like one amorphous whole with no depth & poor distinction between them. Personally, I felt that lacking both characterization & plot, the story had few remaining virtues to its credit. Overall, I was greatly disappointed with the zine. I had hoped for a greater emotional catharsis than was delivered. Believe me, I love a good tug at the heart, a pull at the soul. I enjoy indulging in our heroes' remorse, guilt, suffering just as I relish sharing in their joy, confidence & caring. But what is the purpose of it all if the sole reason for their existence appears to be the self-perpetuation of a concept? [2]