Dalek Man, London. Having scrambled British SF TV expectations, Terry Nation considers reshaping fan conventions is an article in Starlog #150 in January 1990. It is by Laurie Haldeman and Jean Airey. 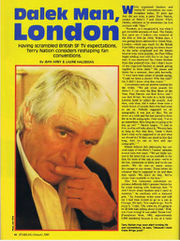 first page of the article

Haldeman and Airey were both very well-known fans of Doctor Who, Blake's 7, and Star Trek and editors of fanzines.

It discusses Terry Nation's plans to recreate fan cons as a for-profit con, cons that Nation would control and reshape.

This article came out during the The Blake's 7 Wars.

It illustrates the theory that where there are fans, there is money to be made.

Conventions were yet another surprise for the writer. "We got seven awards for Blake's 7 — we were the Best Show of the Year, Paul Darrow was Best Actor, and I was Best Writer. We went to a fairly tacky London hotel to collect the awards. And then, only then, did I realize there were a whole bunch of people there who had come to see us. Nobody suggested we do autographs; it was just an idea. We sat down at a table and the line started to form for us to do autographs. Paul said, 'I've to go somewhere. How long are we going to let this go on?' " Nation laughs. "I said to him, and he still talks about it, 'We stay here as long as they stay here, 'cause I think that's what we're supposed to do and what we should do! If they can stand in line that long, then we can sit here and sign autographs.'"

Nation believes this philosophy has colored many of the Blake's 7 actors' attitudes toward fans ever since. "We are fairly unique in the sense that we are available to the fans for most of the day at cons — we're in the bar, restaurants or lobby and we do our panels. We do not — as many actors do — escape to our rooms. Those others do whatever they're supposed to do and then they vanish. We don't do that. We've always been available to the fans."

That first innocuous convention experience definitely didn't prepare Nation for his initial meeting with American fans. "I didn't know about fandom until I came to America," he confesses with a bemused grin. "An American writer came and told me I had been invited to go to a con in Chicago. He said, 'You ought to go. You'll enjoy it.' I said, 'Oh, come on, it's going to be 20 little kids talking about Godall.' Well, was I ever wrong! It was called 'Sweat Con' [ Panopticon West, 1982, approximately 5,000 members] because it was at a tacky Chicago hotel and Chicago was at its ugliest and hottest and the air conditioning broke down. There was the hotel, there were two million Tom Bakers with their long scarves and Daleks wherever you looked! I found it bewildering. I could not believe what I was seeing. They knew who I was! And they wanted to ask me questions about things I didn't remember any more. I just couldn't believe it. I thought, 'Who are these people? Are they loonies? What is this about?' I didn't understand, but at least, I came away knowing there were some people out there who really liked the shows I was doing."

Still disbelieving, Nation agreed to attend another convention, the considerably smaller Scorpio II with Paul Darrow and Michael Keating (Avon and Vila, respectively, of Blake's 7.) This time, he had some advice to give his actor friends. "I took them aside and said, 'Listen, this is something you don't understand and have never experienced before. The fans want to touch you, listen to you, hear about the gossip of the show. They will love you. They will actually love you. They are here to meet you and they're all super people. However strange you think this whole thing is, they are super people. And the guys came away and said, 'You're right! It's incredible! It's wonderful!' That was when I began to get a better understanding of what, in many ways, I had created."

He continues slowly, still obviously amazed at the phenomena he observed. "I had given people an opportunity to gather. People were meeting who never would have met, they were striking up friendships that would exist long after the con, they would talk to one another, write one another, phone one another and it was a wonderful opportunity to have a social event and be involved and make new friends. That was something I had never, ever considered when I wrote Blake's 7, but it seems to me to be an awfully good thing. It's a wonderful interchange. I still think there are many loonies out there," he grins with great affection, "and they're funny and wonderful and nice! I am overwhelmed. I enjoy answering the questions, talking with them and finding out who they are. They're intelligent, bright, quick people who like the show and want to come together and meet."

Not all convention-going encounters were as good as others, however, and Nation has found himself frustrated with some conventions' organization. "I got to be a 'convention animal.' After a little while, I knew what was expected of me and if [the con organizers] hadn't done what I thought they should do for the fans..."

This is why, when Nation's longtime good friend, fellow author and star of the Blake's 7 series — even though his character's name wasn't "Blake" — Paul Darrow came to visit Nation in California, they wound up sharing some of their mutual convention joys. "We talked about how much fun we had, how much we liked fandom here and how we enjoyed it and wasn't it a pity that we could never guarantee the actors would make a convention. [Most fan-run conventions simply can't afford to pay actors' fees on top of all their other expenses. Actors are given their airfare and room and board in exchange for appearing. The "booking" is provisional — if professional work is offered, the actor has the option to accept and forego the con.] I said, 'If we could pay the actors to come here, so it's like a job, then we could guarantee their performances!' Paul thought this was a terrific idea and we started to enlarge upon it."

Nation goes on to enthuse about the concept of a "traveling show," a commedia del'art type of convention that he and Darrow envisioned. "If I had written a play I wanted to take 'on the road,' the management would put together some front money and they would book us into certain theaters. We would arrive in a city and we would go do our play. That's how I see this con. If we have hired our actors, have our scripts ready, have our performances ready and have come into a city, we could have a 'show,' just as we would have with a theatrical production. It's not totally a theatrical production, but I've got to use those terms and try and express it. It's still a fan-con, but we will be using all our professional skills and integrity to give a wonderful, wonderful performance or show. I know we have the skilled actors to do it. I'm skilled enough to be able to write funny sketches. But, nobody's paying me to write those funny sketches, I'm writing them speculatively and I don't write cheaply. I'm doing this because I want these things good. All the guys — especially Paul and Michael — feel the same. I would like to choose the hotels very carefully, I would like to find a better way to do autograph sessions and we ought to have a picture session for people who have cameras."

Nation would also like to revitalize the traditional "cabaret." "For our cons, I would like to see sketches we would play in and also bring some of the fans in to play in them. One lady can be 'Sound Effects,' so she'll be the telephone and make that sound, another one will be the secretary who's crying all the time. If the fans have written something, then the actors will play it the best way they know how." Another idea the crafty Nation has tucked away is to have a short Blake's 7 sketch, but to switch the actor's roles so that Darrow (Avon) would play Keating's part (Vila) and vice versa.

His innovations would also include some educational opportunities. "I want to do a writing class. I'm not going to be able to teach anyone to write in an hour, but I can at least answer some questions about it. Paul and Michael and Gareth [Thomas, "Blake"] — whoever happens to be there — will do an acting class." Because the actors would be being paid for the tour, Nation sees their "roles" as being full-time. "If we are actually 'renting' the actors for those weekends, then they're going to be on duty 9 a.m. and they do not go back to their rooms, they are 'on.' Their role for that weekend is to be 'on' the whole time. I think I know what the fans enjoy now: They want to see us, hear us, talk to us — " Nation stops, then suddenly interjects, "Not me! The actors! I'm second string, and rightly so. The actors are the people the fans want to see. I've become a kind of 'Godfather' figure. I'm the one who's supposed to bring the actors to order and make it sensible and," he voice drops and he peers out from under thick, bushy eyebrows, laughing, "that makes me feel very o-l-d, but I think that's what's expected of me."

When is this marvelous traveling show to appear in your city? Well, initial plans called for Nation's convention "tour" to hit the road in 1989, but many of the actors' busy schedules (Darrow is currently filming a TV series in England, while Keating and Thomas are in plays) have put off the "grand idea" for the time being. Nevertheless, Terry Nation hopes the convention tour can still be realized in the not-too-distant future. Meanwhile, he'll keep his creative impulses in high gear while planning for the time his brand of convention can get off the ground.