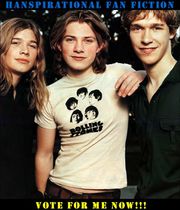 A banner for promoting the awards

The Hanspirational Fan Fiction Awards were Hanson fanfic awards. They were moderated by Marie W. and ran for one round from mid-2001 to mid-2002.

These awards were noteworthy for the sheer amount of categories offered and nominations received. The awards were "sponsored" by the moderators of a number of email newsletters, and many of the stories nominated were only accessible via mailing list. A list of winners is unavailable.