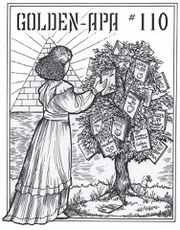 Cover of issue #110, comments by the collator and artist: "I did this cover for a Golden in the early 2000s. It shows a literary lady picking printed apples from a mystic tree. Behind her is the Pyramid which was one of the favorite symbols of the "Illuminatus" fans. The lady is loosely based on Nancy Lebovitz, famous for her aphoristic and humorous badges, who had been at one time the editor of Golden-APA. Black ink on illustration board, 8 1/2" x 11", early 2000s. Click for a larger view." -- Golden Memories (April 14, 2016)

In the early 2000s I inherited the editorship of a magazine called "Golden-APA" from its previous editor. Golden-APA was a privately published writer-participant publication once known as an "Amateur Press Association," hence the acronym APA. These private magazines, usually printing no more than 10 or 15 copies, originated long before the modern internet era. Everyone who wanted a copy would contribute their own sheaf of writing or art, photocopied to as many copies as the group had members. The editor's job was not really to edit or change anything in the texts but to put the sheafs together in order so that there would be identical copies. Then the editor would put a cover on it, staple them together with heavy-duty staples, put the copies in envelopes and mail them out. The APA members were supposed to send in some money to cover the copying process and the postal fees.

The APA was, therefore, a do-it-yourself magazine and one fun thing about it was that you could publish your comments on whatever you read in the previous issue. Something that takes a second now on Facebook took a month or two back in the era of paper and print. I remember waiting eagerly for my copy so that I could see what my print-friends had to say about my deathless prose. I always put art into my entry, too, so the friends could see what I was working on.

"Golden-APA" got its name from "Golden Apple," a theme which was featured in the satirical "Illuminatus Trilogy" (first published in 1975) by Robert Shea and Robert Anton Wilson. This somewhat forgotten text inspired a movement in science fiction fan circles in which chaos, fetishistic sex, drug use, and uproar were cultivated as virtues. (Easier said than done!) The original Golden-APAns were closer to this movement and kept the Shea and Wilson text as the prime topic, but by the time I inherited it, Golden had lost much of its uproarious quality and had become an intellectual journal of diaries and literary criticism. As I recall, I edited it from 2000 to 2003 at which point I was no longer willing to persuade people to participate in the paper process. All of the participants migrated to the Internet and newsgroups and forums. There may still be one or two of these APAs still in operation, but why would anyone want to go through the old-fashioned process when you can post a rant on Facebook and have it read by your friends in a minute. [1]