Glory and the Ghoul 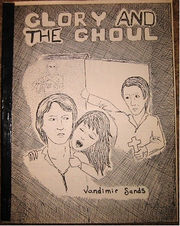 Glory and the Ghoul is a gen Shadow Chasers 59-page novel by S.L. Schneider/Vandimir Sands.

"Jonathan and Edgar investigate a lady vampire and a psychic detective, not to mention the little, old lady and her collection of shrunken heads." -- from an ad in The Monthly

"Jonathan MacKensie and Edgar Benedek arrive to check out a young detective reported to speak to the dead. But Peter Glory would rather investigate lady vampires than talk to a paranormal investigation unit." -- from an ad in I.Z.I.

"An American detective story with Jonathan MacKenzie and Edgar Benedek dropped right in the middle. Featuring phantom hearses, lady vampires, and a young man whom may or may not see ghosts." -- from an ad in Zine Scene.

"Jonathan MacKensie and Edgar Benedek are on the trail of Peter Glory, a young man reported to speak to ghosts. But Peter claims he doesn't believe in ghosts, and he has more important problems ~ his uncle's recently been murdered, his secretary screams everytime she sees Jonathan, and a vampire's moved into a sweet old lady's house. Now the Shadow Chasers must contend with shrunken heads and Johnny the Ghoul." -- from For Your Information #5