Glitch (link) is a free online video game produced by Tiny Speck. While the game is free, people can purchase subscriptions to gain subscriber-only content such as a monthly stipend of credits, teleportation tokens and votes.

According to the website's FAQ, Glitch is:
a web-based massively-multiplayer game which takes place inside the minds of eleven peculiarly imaginative Giants.

The aim of the game is "The point of the game is whatever you decide it is. There are quests to go on, skills to learn, races to run, puzzles to solve and piggies to nibble. You can specialize as a chef, build your own multinational construction company, or just hang out with your friends. The world is your big, colorful, non-smelly oyster."[1]

Your character is referred to as a Glitch (plural glitchen). There are things in the world of Ur that can be shaped by players like the names of the animals or what sort of trees are planted on a street. This can cause a lot of friction between players.

As of Dec. 9, 2012, Glitch has permanently shut down. The forums and avatars remained active for some months after the game closed, allowing fans to interact with each other and access a small number of game features, such as costumes for their avatars. Several memorial sites are still active, including a small Tumblr fandom, and some fans are discussing developing new games in the spirit of Glitch.

Some players have created The Glitchen ImaginatUr, a newspaper about the happenings within game.

Glitch has forums where players discuss issues and ask questions about the game. Some of these discussions can get heated. Glitches of Ur is a Dreamwidth community for fans of the game.

Glitch was a nominated fandom for Yuletide 2011, with several works for it posted to AO3.

Glitch allowed players of high enough skills to name several types of creatures: Piggies, chickens, butterflies, and batterflies (an underground bat-like creature). Since the ability to create piggies, chickens, and butterflies occurred some time before the ability to name them, and new creatures created by the devs were always unnamed, there were almost always extra animals to name--or it was always possible to rename the creatures in public streets.

Many players used in-game resources to recreate aspects of other fandoms, dressing their avatars as characters or decorating their houses or towers like scenes from a movie or TV show. LeeLu Multipass named her tower "Fhloston Paradise" after the pleasure resort in The Fifth Element, and each of the 8 floors was inspired by a scene in the movie. 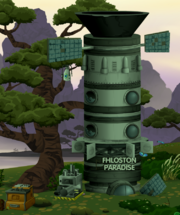 Piggies could be grabbed by any player with the right skills and Pig Bait; this resulted in piggies being stolen from people's "home streets" (more like a front yard; their personal property). While this caused occasional upset in the game, all piggies were functionally identical, and a player who'd been stolen from had only to hatch or grab new piggies to replace the ones they'd lost--the only thing actually lost was time.

Players who did not yet have the skill to acquire or hatch piggies of their own sometimes asked others to provide them, and high-level players would grab a few (from public streets or their own yards, if they were polite) and donate them to low-level players who wanted to enjoy piggies in their homestreets.

If too many piggies were on a street, they would act unhappy--unable to provide meat, and complaining about the crowding. Players of high enough level would often converge on an overcrowded street and "rescue" piggies, taking them away to less crowded areas. Sometimes, however, players used the known "unhappy" statements of animals to arrange snapshots. 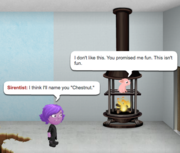 Sirentist places a piglet in an uncomfortable situation

There are several different housing issues that the players of Glitch face. In the earlier versions of the game, the lack of specific houses tended to crop up often, as houses sold out quickly. The lack of variety bothered many players; there weren't any 30k or 50k bog houses. Bog houses only allowed herb gardens while other houses only allowed crop gardens, so players often opted for the ones with the more-valuable herb gardens. Later in the game, these restrictions were removed; all players got houses of their own for free, and all of them could grow any kinds of crops or trees.

It started when people began killing off spice trees in Ix and planted gas trees instead. Ix used to be all spice trees.

Rooks are black birds that attack the giants and thus attack the imaginary world of Ur. Players can fight off these Rooks by learning the skills Martial Imagination to stun the Rook and Piety to harm it by priming shrines. While the Rook is attacking, players' mood and energy can drop, and it is possible to die during an attack if one is not careful to manage their mood and energy levels. To fend off a Rook, there needs to be a group of Glitches to help stun and attack.

Players join the group Rook Alerts to find out if there's an incoming Rook attack.

There are fake Rook attacks that are caused from landing on the Rook with the 12-sided dice. The reason they're called fake attacks is because Glitches aren't needed to stun or attack it with a shrine, though animals do need to be revived afterward.

A YouTube video showing how Glitches fend off a Rook attack

A player has been keeping track of Rook attacks to see if there's a pattern to when they attack.[2] Their data has been tracking attacks to be approximately 2 real-time hours apart ± 10 minutes within the territory Aranna.

The End of Glitch 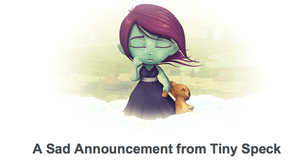 Unfortunately, Glitch has not attracted an audience large enough to sustain itself and based on a long period of experimentation and our best estimates, it seems unlikely that it ever would. And, given the prevailing technological trends — the movement towards mobile and especially the continued decline of the Flash platform on which Glitch was built — it was unlikely to do so before its time was up. Glitch was very ambitious and pushed the limits of what could be done in a browser-based game ... and then those limits pushed back.

For many of us at Tiny Speck, the creation of something like Glitch was a long-held dream. There's no better word than "heartbreaking" to describe what it feels like to have to do this. And we know that for many of you who poured your creativity, energy and imagination into Glitch and the community, it will be heartbreaking as well. We are sorry to have let you down.

We are grateful to have had the opportunity to play with you. The game was absolutely preposterous. And yet, we kind of liked it. [3]

Many fans expressed their sorrow at the loss of a unique game and a close community of friends in the official Glitch forums. Anons at Fail Fandom Anon also expressed disappointment at Glitch's closing. Nonnies discussed Glitch after the end.