Title: All The Noise Died Away
Author: only_because3/jeytonbrucasnaley
Word Count: 47,667 (total)
Rating: M
Warnings: Zombies and all that those include (this does include character death). Also, slight non-con warning for something in a future part. I'll make sure to point it out then.
Characters: All of the Glee club members as of Season 2 with the exception of Lauren and Mercedes. Pairings start out as canon and go from there
Spoilers: Up to season 2. It's completely AU from that point on
Summary: Up until today, they’d been safe and that’s the only thing that should have mattered. It is the only thing that matters.
Fanmixer: kcollinson


Title: always busy being make believe
Author: blackmustache
Pairing(s) or Character(s): Chris/Darren
Word Count: ~19,500
Rating: PG-13
Warnings: None
Summary: When Chris joins some of the cast on a trip to London for a convention, an awkward encounter with a naked Darren and some late night flirting lead him to contemplate his feelings for his co-star. With Ashley on hand to offer her unique brand of support, Chris is just trying to survive the weekend without completely embarrassing himself in front of Darren, his friends, or the eight hundred strangers he's there to meet.
Artist: kwest300


Title: Can't Do it By Myself
Author: cowboyhat
Pairing(s) or Character(s): Puck, Artie, Blaine
Word Count: ~15,860
Rating: PG-13
Warnings: Nothing beyond what grade they're in. This was written before 3x14, any spoilers for future episodes are completely coincidental.
Summary: Puck has never been very good at accepting help, but after a horrible accident in a winter snowstorm, both of his legs are amputed above the knee. Besides months of rehab and dealing with the fact that he can't freaking walk, Puck must redo senior year and face an uncertain future. But with the support of his friends Blaine and Artie, Puck discovers that he has people he can depend on, no matter what.
Artist: thelastpen
Fanmixer: cowboyhat


Title: Circumstance and Luck
Author: madd4the24
Pairing(s) or Character(s): Kurt/Dave, (Kurt/Blaine), Quinn/Puck
Word Count: 52k
Rating: Mature
Warnings: I feel like I should warn this reads a bit like a harlequin novel. What can I say? Guilty pleasure is guilty pleasure.
Summary: Dave Karofsky led a boring life as a practicing nurse, doing his best to keep his head down and atone for the mistakes of his youth. And then Kurt Hummel blew into his perfectly constructed, perfectly safe life, bringing with him an infant son and a whole mess of trouble. After that, boring was something Dave never wanted back.
Fanmixer: jk_rockin 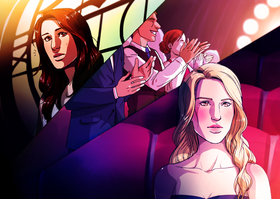 Art by drums_of_death for In Dreams

Title: In Dreams
Author: memoryofamemory
Pairing(s) or Character(s): Rachel/Quinn
Word Count: 15,250 words
Rating: R for implied situations
Warnings: Light angst
Summary: Rachel Berry used to dream about Broadway. She remembers those dreams vividly. She can see the details clearly, the lines of the stage, the lighting flickering across the crowd (lighting that will later prove to be her downfall). She remembers hearing the applause coming from the crowd, and it would linger in the back of her mind when she woke up the next morning. At least, that was how the dreams used to go. Except now, Quinn is in her dreams, rewriting the details. Quinn is watching her on stage, and it is her applause Rachel's mind remembers, not the crowd’s.
Artist: drums_of_death


Title: I've Got A Fever (And the Cure is More Darren Criss), or, In Sickness and in Schmoop
Author: misswonderheart and waxpoetically
Pairing(s) or Character(s): Chris/Darren
Word Count: ~47k
Rating: NC-17
Warnings: Sick!sex (aka: handjobs, masturbation, kissing, awkward backrub boners)
Summary: Chris is sick. Chris is totally, unequivocally, completely sick. It's a good thing that he's got four days off from filming and apparently, Darren volunteering to be his personal nursemaid. He's too sick to put up much protest, and suddenly Darren is staying at his apartment 24/7. And Chris... Chris is starting to realize he doesn't mind this one bit.
Artist: kwest300
Fanmixer: loreleilynn


Title: Jennifer’s Rabbit
Author: laotse4
Pairing(s) or Character(s): Sam Evans/ Rachel Berry
Summary: Sam and Rachel have been together since their junior year of High School, they got engaged about a year ago, and now their life is about to change when Rachel finds out that she is pregnant, it wasn’t planned but they are going to do the best of the situation, with Rachel’s moods swings, doctors appointment, cravings and the labor, and we can’t forget about all of the milestones that they baby will have during their first year of life. This is a part of a series of one shots (short stories) that I have created but the you don’t have to have read those to follow this one.
Word Count: 15 494
Rating: M/15+
Warnings: None
Artist: rumchocolate
Fanmixer: queenofbabble


Title: Mousetrap 101
Author: Whatthefuck2005
Characters: Rachel, Finn, Kurt, Blaine, Karofsky, Jessie, Quinn, (Noah, Artie, Brittany are mentioned)
Pairing: Finchel, mentioned Bartie, pre-Klaine if you squint.
Word Count: around 14.500
Rating: M
Warnings: character death(s), (mostly off-screen) violence.
Summary: The news on the television at Oaks Manor relates a murder that has recently taken place. Rachel and Finn Hudson, the young, newly-married owners of the Victorian mansion which they recently converted into a guest house, hardly notice the news. They are far too busy preparing for the arriving of their first guests—and concerned that the blizzard raging outside may hamper their arrival. But everything changes when one of the guests gets murdered, leading to the realization that the killer is currently in the house and because of the blizzard, they have no way of escaping. Who's going to be the next victim?
Artist: naderegen


Title: Through The Hidden Door
Author: JudeAraya
Pairing(s) or Character(s): Kurt, Blaine, OC
Word Count: 40k
Rating: NC-17
Warnings: Off-screen non-con in reference, some dub-con, emotionally abusive relationship, and mild violence
Summary: Blaine Anderson is lost in a relationship that is emotionally abusive. He’s settling for a fraction of his dreams of romance and love, sure that his unhappiness isn’t enough to justify breaking someone else's heart. Until he meets Kurt Hummel, the enigmatic boy he once noticed on a crowded dance floor. Kurt has his own demons to face, mistakes made in youth and the longing wish that he’d listened to his father when he’s insisted that he mattered. What starts as a tenuous friendship eventually becomes so much more. Both boys are broken and in need of friendship. As time passes, however, neither boy is able to deny the truth they’ve come to realize; that they are desperately in love with one another.
Artist: cunt_aloupe
Fanmixer: rdm_ation


Title: The Way To Each Other
Author: thelastpen (Sio and Maura co-written fic)
Pairing(s) or Character(s): Santana/Quinn
Word Count: 230,271
Rating: Hard NC-17
Warnings:talks of suicide, angst, language, graphic het and femslash sex, non-con, dub-con, oral, vaginal, anal, pedophilia, sex work, underage prostitution, abuse, violence sexual and non, minor character death, self-harm, drug use, disease - HIV (warnings will be highlight to read when posted on other LJ comms)
Summary: Santana's life is far harder than it appears to the average viewer. Her dad's in jail and her mom turns tricks in their old family home. Worst yet, Santana herself has to do the same to keep her mom alive and food in her belly. Can Quinn save her? Or will Quinn's domineering father ruin everything?
Fanmixer: queenofbabble


Title: We All Seek Out to Satisfy Those Thrills
Author: undrsomestairs
Pairings: Kurt/Dave Karofsky, Blaine/Sebastian
Word Count: 15,270
Rating: R
Warnings: Minor character death and suicide discussed (occured in the past), homophobic language and violence
Summary: Supernatural fusion AU. Dave and Sebastian are cousins who travel the country to hunt monsters. They end up in Lima, Ohio, where Kurt and Blaine have just moved into a house that's haunted by a homophobic and homicidal spirit. Dave's focused on the hunt, Kurt knows what he wants, and Blaine and Sebastian won't stop having sex.
Artist: mari-mcsly

Artist: kristianabel22
Pairing(s) or Character(s): Kurt
Rating: G
Warnings: None
Artists Notes: I cant believe I read the posting dat wrong! DOH! well neither the less here is my piece of art. Unfortuantly my Author dropped out so I was never able to read the finished story so I created a piece from early on in the story when Kurt is forced to leave and go to Dalton.