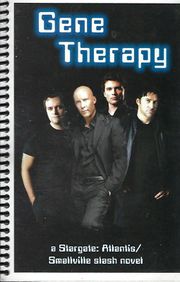 Gene Therapy is a slash Stargate Atlantis/Smallville crossover novel by Lady Ra. The pairings are McKay/Sheppard and Clark/Lex.

From a distributor, Agent With Style: this novel is a "tongue-in-cheek romp from the Pegasus Galaxy to Comic Book World and back again. In the midst of a dogfight with the Wraith, John Sheppard wishes hard that he and his shipmates were someplace safe, and in the blink of an eye, they've crashlanded in Smallville, Kansas, where they are discovered by Clark Kent and Lex Luthor. Clark and Lex are bemused by the fact that these aliens seem to know all about them and their lives -- though the Lanteans are adamant that Clark and Lex are supposed to be bitter enemies, not new lovers. Could the Lanteans be from an alternate Earth where Clark and Lex are only characters in a comic? And can Rodney McKay stop showing off his knowledge of the Marvel universe long enough to notice that Sheppard is coming on to him?"

In the midst of a skirmish with Wraith darts (while flying a malfunctioning puddlejumper, no less), SGA-1 (Ford version) suddenly find themselves crashing onto a planet that looks remarkably like Earth. Exactly like Earth, in fact, until they bump into Clark Kent and Lex Luthor. Heh. Who but Rodney could manage to escape flying space vampires, only to find himself in comic book land? Now, of course, they need to get back. Fortunately they have the Man of Steel and a billionaire sorta-evil genius to lend them a hand. I have a lot of sentimental affection for this story, since it is the reason I started reading SGA in the first place (up to that point, the only slash I had much interest in was Smallville). There's not much angst or drama -- frankly, it's about a half inch away from sheer fluff -- but it's fun and light-hearted and Clark and Lex in particular are simply adorable. Plus, it's one of those rare crossovers that give equal time to both fandoms, so it's accessible even if you've only watched one show or the other. Perfect for those who are looking for an agreeable way to pass a few hours. [1]