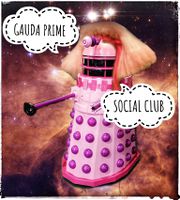 The Gauda Prime Social Club is a Discord server dedicated to discussion of Blake's 7. Started in 2019, by August 2020 it had more than 30 active members and was actively seeking more through regular posts to a dedicated Tumblr: https://gaudaprimesocialclub.tumblr.com/

Initially the server was created for off-topic conversations that didn't fit the rules of the Rebels and Fools Discord server, but by 2020 has morphed into the place for irreverent, and often adult, Blake's 7-related discussions in the vein of Space City and Freedom City mailing lists. The server's inside jokes and memes have inspired the creation of many humorous manips, some of which can be found on the GPSC tumblr. A great part of the server emojis also references those jokes.

The server's first ever fanzine was released on the 1st of March 2021 through the server and Tumblr. The zine is a 194-page collection of fic, art, games and filk ranging from gen to explicit fics, with a balance of het and slash fic.