Gambit is a gen Blake's 7 club zine of fiction published in Australia. It has three issues.

This was one of the finds of MediaWest -- with special thanks to Carol McCoy, who spotted it in Sheila Paulson's zine sale and reserved it for me. I had never seen the zine before and knew of its existence only because these two issues are listed in Bill Hupe's Blakesindex. Has anyone ever seen #1? And were there any more issues?

I didn't much care for the long story that makes up #3, in which the Liberator crew encounter a dear little blonde girl who says remarkably precocious things. But there is some good stuff in #2. My favorites were two Tarrant stories: "Fade to Black" by Marilynne Cromarty, in which Tarrant comforts Avon after Rumours in a very believable, no-nonsense Alpha way; and "Sojourn" by Daniel Murphy, in which Tarrant has a brief encounter with Jenna. The Avon/Anna poems by Marilynne Cromarty were nice too.

At last I have seen #1 of the Australian zine "Gambit", which preceded the well-known American zine of the same name.

This is a pretty good zine, worth keeping an eye out for. Interestingly, it has a number of positive Tarrant stories, perhaps due to the influence of Tarrant fan Monica Mitchell. (BTW, I'm still in search of her novel "Thomas Wolfe Was Right", aparently a pre-series story involving an ocf, Travis, and Jarvik. I'd particularly like to know whether it's gen or adult.)

I was very taken with the illo on p. 2 showing Tarrant being tortured, but the story it accompanied wasn't particularly wallowy; it was more a semi-comic treatment of the disappointment of the torturer when his victims all escaped.[1]

Gambit 1 was published in September 1981 and contains 70 pages. 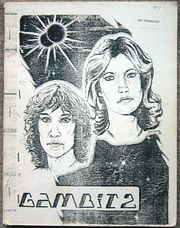 Gambit 3 was published in September 1982 and contains 66 pages. All art, including cover, is by Mike Champ. It contains a single novel by Yvonne S. Hintz called "Jared's Daughter." 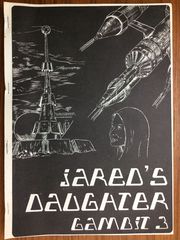