From Fanlore
(Redirected from GEMINI LYNX)
Jump to: navigation, search 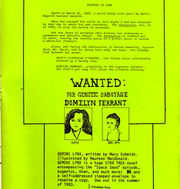 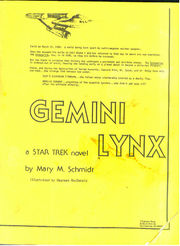 Earth, 3-20-1996: a world being torn apart by multi-megaton nuclear weapons. Khan has escaped his exile on Ceti Alpha V and has returned to that day to abort his own overthrow. The Enterprise needs to stop him before he succeeds. Kirk is ordered out of orbit, leaving the landing party on a planet about to become a white hot fireball. Alone and facing the destruction of humanity, Kirk, Spock, and McCoy have only one hope.

From a publisher's flyer:

From Bill Hupe's catalog: "Earth on March 20, l996: a world being torn apart by multi-megaton nuclear weapons. Khan has escaped his exile on Ceti Alpha V and has returned to that day to abort his own overthrow. The Enterprise, too, is in 1996, to stop him before he succeeds.

But there is evidence that history has undergone a permanent and terrible change. The Enterprise is ordered out of orbit, leaving the landing party on a planet about to become a white-hot fireball. Alone, and facing the destruction of Terran humanity, Captain Kirk, Mr. Spock, and Dr. McCoy have only one hope... the strange link between two women.

Ship's Historian T'Parvan... the Vulcan whose scholarship covered up a deadly flaw.

Domilyn Ferrant... plaything of the eugenics tyrants... she didn't get away till after the ultimate atrocity.

GEMINI LYNX encompasses the episode "Space Seed" and a variety of questions concerning eugenics and other topical subjects. The fact that GEMINI LYNX deals with Khan should provide those who enjoyed STAR TREK: II: THE WRATH OF KHAN with the opportunity to explore how the novel differs with the "official view" -- and GEMINI LYNX was written first!

I much prefer Mary Schmidt's sequel to 'Space Seed' than Paramount's. Now if they had used this for a film script, it would definitely be Oscar material. What a superb film this would make. It has all the elements studios look for; an evil genius, diabolical genetic experiments, a lost love, a burgeoning romance, time travel, plus a nuclear war for extra spice.

The plot: Khan and Marla McGivers escape from Ceti Alpha on a small ship that mistakenly landed on their exile planet (with no surviving crew) and travel through a dark star, headed for Earth of 1996, where Khan plans to prevent his own overthrow. The Enterprise is, of course, sent to find and stop him. On board they have with them Lt. T'Parven, a Vulcan historian with a mentally unstable past, and foremost expert on this period in Earth history. Because of her strangely dark, spotted skin, she is nicknamed "Lynxie."

The storyline switches back and forth from the Enterprise crew and a group of characters from the 1990's including Khan and the other Superiors we saw in the episode. Chief along these is Domilyn Ferrant, a geneticist used by Khan's laboratories as the female donor for his scheme to create a highly mutated son who will ultimately go to the stars on the DY-100 ship and conquer the universe. Ferrant and T'Parven possess a strange mental link that surpasses the barriers of time and which enables them to confront Khan. Ferrant escapes her captors at North American Genetics-and hides in a remote part of Massachusetts with a group of rebels, unaware that nuclear war is about to begin. The story is told through many flashbacks (occasionally flashbacks, within flashbacks) and sometimes it becomes confusing to keep track of what one is reading, a flashback or the main narrative. Frequent switches in point of view within the sale scene also serve to confuse. There's a lot of frenzied dialogue, particularly in the beginning, that could have been improved by more narrative breaks.

Occasionally, there's not enough of a description of the setting, although in the second half this is not a problem. I also have a problem with Schmidt's historical perspective. History is my field and I've always rebelled against the notion of individual personalities wielding such a great influence on the outcome of a historical event, although I don't dismiss their importance altogether. This story puts the war too much on Khan's shoulders, and there's really not enough of a historical presentation of what kind of world Earth is in 1996; what are the trends, developments, conflicts, attitudes that give Khan such power. This is like blaming World War II solely on Adolf Hitler which is simplistic to the extreme. Wars don't operate in a vacuum.

There are other things I found inappropriate. When Khan lands on Earth, he loses Marla, whose physical condition is becoming a burden to him anyway. Instead of immediately running off to civilization and arriving at the scene of his overthrow, he sticks around for no apparent logical reason to battle the band of "Norlals" (non-Superiors) he assumes has captured McGivers. Unstable Khan may be, but he's not stupid. As for T'Parven, I hate to put the label "Mary Sue" on her because Schmidt does manage to present an interesting, somewhat complex person. But look: every Enterprise male gapes lustily at her, Spock is protective of her, she's a brilliant scholar known the galaxy over, she's a genius at singing, she's a perfect mountain and rock climber. Needless to say, one does get tired of this. Is there nothing this woman can't do? Her one "flaw" is her inability to accept the death of her bondmate (Sheral) who was killed on the Intrepid, but that in itself is presented as proof of what a loving, loyal, warm, faithful woman she is. Indeed none of the women in this novel have ambitions or conflicts that don't somehow involve men as their goal or solution. T'Parven's main driving force is her search for Sheral. Domilyn is a cry baby whose boyfriend, Jesse, is the 'man behind the woman' comforting her and saving her. Regina deAngelis is one of the genetic superwomen whose main ambition is to wed Khan (She is also a superbitch.) Karla's main reason for living is Khan (certainly Schmidt can't be blamed for an already existing character's flaws but one would hope that life with Khan had hardened Marla's weaknesses.) There are lots of incidental women who fawn all over Khan throughout the story. Doretta Lane, his present concubine, is a cliched Hollywood starlet whose main goal in life is to purchase a diamond. Most of the women in the survival camp are weak-willed. The only competent one there is Janet Byrdsong who seems to be a tough leader type. Then of course there is Christine, whom Schmidt characterizes as a prying, jealous, catty, calculating, obsessive, unprofessional woman who makes herself crazy by worrying about a possible bonding between Spock and T'Parven. End of criticisms. Despite all of it, believe me when I say that the novel is a suspenseful, action-filled, taut work. 'T'Parven and Domilyn are not full- fledged simpering Mary Sues. Both of them prove their bravery, defiance and initiative several times over. Schmidt's presentation of their time-spanning link is fascinating. Her descriptions of the horrific mutant son of Khan and Ferrant, and of the other failed mutant experiments are frightening and disturbing. Some of her characters are extremely well-developed, such as Dr. Leo Eleven, Khan's genetic creator. The story is powerful, fluid, engrossing and very imaginative. I especially liked Schmidt's use of a river as a metaphor for the ongoing conflicts. The time travel theory the Enterprise uses is called 'Time and the River' that likens time to the ever-flowing motion of a river. T'Parven once dreams of a river. Ferrant and her friends hide near the White River which is poisoned from chemicals. When the war is done, the bridge over the river is destroyed, releasing underground, pure waters that had been there, waiting for centuries. Khan and Marla land near the river. In many instances, the novel becomes quite poetic. [1]

GEMINI LYNX chronicles the further adventures of Khan and Maria McGivers. It was written in 1978, so please remember to forget TWOK when you read it.

Remember the "Time is a River" theory from "The City on the Edge of Forever?" Ms. Schmidt makes effective use of this concept to assemble a diverse and interesting collection of participants in an important event in Earth's history. First, there are Khan and the pregnant Maria McGivers  returning to Earth on March 70, 1996, via time travel in a ship acquired by accident. Purpose: to abort Khan's over throw. Then there is the Reed, the little science survey craft whose personnel attempt to stop Khan. Among the sur vivors from the Reed is T'Parven, a spotted Vulcan who is called Lynxie by her shipmates. Spock regards her as the "walking dead" because her bondmate perished with the Intrepid. She is also the author of Earth in Transition, the definitive work on the Eugenics War. The Enterprise rescues the Reed's survivors and is soon in hot pursuit of  Khan. And then there is the little group of refugees from tyranny huddled in an abandoned farmhouse near the ghost town of prosperity in 1996. Among the refugees are the amnesiac Domilyn Ferrant, who will one day become the first governor of Mars; Jesse Dawkins, who will be a medical pioneer; Janet Byrdsong, pioneer of parapsychology whose studies will open channels of communications between telepathic races all over the Federation; and Alban Springer, who will draw up the Fundamental Declaration of the Martian Colonies.

Khan's ship was damaged, and he is forced to crash land near Prosperity. The Enterprise follows. A search party consisting of Kirk, Spock, McCoy, and T'Paruen beams down to apprehend Khan and McGivers and is apprehended by the refugees instead. What a predicament! How are they going to explain away their presence and apprehend Khan without contaminating the four most important people alive in 1996? And most important of all, why are T'Parven and Domilyn Ferrant telepathically linked?

Yes, folks, with almost-Armageddon raging overhead, one of the most important events in Earth's history is an apparently minor incident taking place in a tiny abandoned town with a small, but select group of participants coincidentally gathered from time and space. I enjoyed Gemini Lynx. The main characters, T'Parven and Domilyn Ferrant, are fresh, strong, and memorable. Both are victims of crippling loss. T'Parven lost her bondmate, and Domilyn lost "her innocence," but screwed Khan royally. But Domilyn is more that just another one of Khan's victims. She is the Edith Keeler of 1996. Only this time the "focus" must live, not die -- and if Khan can't have victory, a little revenge will do. The storyline is developed slowly, with heavy dependence on flashbacks, but it eventually gets to a resolution which is dramatic and satisfying. I predict that Gemini Lynx will appeal to a predominantly female audience, i.e. it tends more toward soap opera than action/adventure.

The print job is good. The type is reduced as much as possible and still be readable (which gives one a lot of story for the price). The illustrations are mediocre and did not reproduce well. Rated PG (adult concepts). It is only fair to warn you that the publisher is slow to fill orders. [2]