Friends and Lovers is a Jensen Ackles/Jared Padalecki slash anthology by Agt. Spooky. This is a RPS zine. 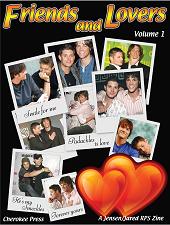 • Touched by Darkness
An accident on set changes Jensen and Jared's relationship forever.

• Private Time
Based on an interview Jensen and Jared gave, where Jensen calls their ride into work together their "private time". So what exactly DO they get up to in that truck?

• Light My Fire (Firefighter AU)
In New York, two men meet under unusual circumstances, and find themselves falling for each other. But when Jensen Ackles learns who Jared Padalecki really is, it all comes crashing down. Can Jared convince Jensen to open up his heart and take a chance on love again, despite who Jared is?

• One-Man-Show (Times Two)
Jared's been sick for days, so Jensen takes matters into his own hands. Literally.

• Holding On To You
Set at the end of Season One. Jensen wonders if he'll be able to hold onto Jared if Supernatural is cancelled, fearing that Jared feels that when the show is over, so are they.

• Green-Eyed Monster
The weight of unrequited love lay heavy on Jensen's shoulders, and it was getting more difficult by the day for him to bear it up. But will an unexpected kiss finally change everything? 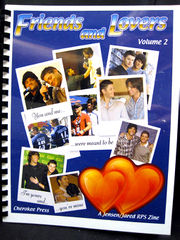 • Lakeside Memories
Summer hiatus. Halfway across the country from one another for months and Jensen feels that he’s starting to lose the man he loves, that recent events in Jared’s life have him reconsidering his relationship with Jensen. With less than a week before filming begins on season four, can a trip to a house in the woods bring the two of them back together?

• Physical Therapy
Jared finally gets his cast off and Jensen knows just what to do to help him rehabilitate his arm.

• No More Running
Jared wants to run, but Jensen won’t let him.

• Reunion
A sweet and fluffy Valentine’s Day offering - after months of not seeing each other, Jensen and Jared are reunited after the writer’s strike.

• Playing with Fire (Firefighter AU)
Fireman!Jensen and Paramedic!Jared are back in this sequel to "Light My Fire" in Volume 1. It's five months later and Jensen is nearly a full-fledged paramedic. But becoming a medic means no longer being able to work with Jared at Station 127 and giving up his chance at a promotion to Lieutenant. As graduation looms, will Jensen change his mind? Then add in a young man Jensen rescues from a fire that becomes an obsessed stalker, and Jared’s altercation with a victim’s husband that threatens his career, and things turn explosive at the FDNY.

• Can There Be a Happy Ending?
Jensen tells Jared how he really feels about Season Four.

• Turn the Key, Open the Door to My Heart
On Jensen's 30th birthday, Jared unlocks more than his heart.

• Drive Me Wild
Jensen should've known better when he told Jared they could do anything he wanted for his birthday. His words are now coming back to haunt him.

• This Fragile Heart (AU)
A retelling of the movie “Return to Me”, written with a J2 twist.